Up front, allow me to apologize for some inexactitudes in the title of this article:

1. We actually tasted THREE African beers of the same brand called “Tusker”, which is a popular lager produced in Nairobi, Kenya. One of the beers was 12 years old, another was 7 years old, and the third one was recently purchased.

2. The older beers were first stored at room temperature, and then accidentally left unrefrigerated in a hot garage for the last four years. Of course the term “hot garage” is relative. In this case, the garage would reach temperatures upwards of 117 °F (47 °C) during many months of the year.

We figure there might be some questions about this tasting experiment, so here’s a rough attempt to answer some of those:

Q1. Did anyone get sick or die from drinking this old beer?

Q2. Were these beers intended for aging like some sour beers or some high ABV beers?

A2:  No, the beers in this tasting were ABSOLUTELY NOT designed for aging.  The beers in question were your run-of-the-mill standard lager beers weighing in at 4.2% ABV.  In fact, the brewery indicates “Tusker” is best within one year of bottling, and these dates are listed on the bottle.

Q3: Wait, so you’re telling me that a brewery from Africa has been clearly listing easy-to-understand calendar bottling dates and “best by” dates on their beer for at least the last twelve years?  Why don’t more breweries in the U.S. and the rest of the world do this?

A3: Fantastic question.  We assume that the African brewery that produces Tusker is utilizing some ridiculously expensive advanced technology unavailable to most other breweries in the world.  We can’t think of any other possible explanation for why a brewery would not want to let consumers know when their beer was bottled.  Let’s move on from this question quickly please.

Q4: If you knew these beers weren’t intended for aging, especially out in a hot garage, what possessed you do conduct this experiment?

A4: Three words: science.  (Well, “three words” if you include the first two words of the previous statement; and now an additional twenty-nine words from this sentence used to explain the first statement.  So, technically thirty words?  Well, now a total of fifty-one words.  Or do the words “twenty-nine” and “fifty-one” actually count as one single word or as two words?  Sorry, let me get back to you on this question.)

Q6: Do you think the beers aging in the hot garage did anything weird to the beer?

A6: Not really.  I could be wrong, but my impression is that heat generally accelerates the aging process, so perhaps the beer took on an increased aged character?  But after twelve years, what’s the difference.

Q7: I’ve heard that after a few years, beer can develop “floaties”, or little clumps of coagulated protein.  That twelve-year-old beer must have looked like a snow globe, right?

A7: Like you said, “floaties” in old beer can be pretty common.  They may look weird, but floaties aren’t dangerous or taste like much of anything.  Oddly enough, there were no floaties in any of these beers.  My guess is that floaties tend to develop in beer with more protein in suspension such as in beers that contain some portion of wheat like in the image of a seven-year-old Canadian wheat beer below. 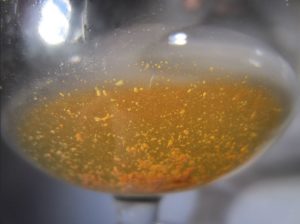 We did, however, notice that all of these beers were bottle conditioned, and that layer of yeast at the bottom of the bottle was a darker shade of brown in the older beers.  Below is a rare image of yeast and sediment caked on to the bottom-inside of the 12-year-old bottle of Tusker, also known as a “Yeast Totality”: 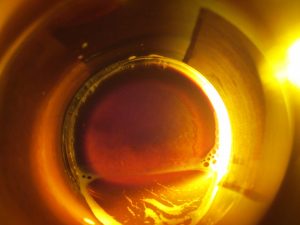 Q8: So I’m assuming the older beers were disgusting.  The 12-year-old beer must have been awful, a drain-pourer for sure, right?  How did it not make you guys sick?

A8:  No, they weren’t disgusting.  I get that some people have this natural fear of old food because we know that many kinds of food spoil after a certain time and can make humans sick.  Of course, there are some well-known “shelf stable” exceptions like honey and bottled spirits like vodka that basically have an infinite shelf life.  And although most beer certainly isn’t intended for aging, I would suggest that a properly bottled beer never “goes bad” and spoils in the way chicken or milk might.  Instead, most bottled beer tends to be “best” by a certain date, but likely never gets to the point where it is undrinkable or would make somebody sick.  This is because the alcohol and, in many cases, the hops in beer act to preserve the beer, preventing harmful organisms from growing in the beer.

Q9: So I’ve heard that old beer tastes a certain way because of oxidation.  They say beer will start to taste like cardboard.  Is that would happened here?

A9:  “Cardboard” is a commonly quoted descriptor for old or oxidized beer.  But that’s a generalization because not all styles of beer will age in such a way that they necessarily smell or taste like cardboard.  But, yeah, a faint cardboard or papery character was slightly noticeable in these aged beers, though the more unmistakably obvious descriptor in this case was cooked squash.

A10: Sort of.  The beer is named in memory of the company’s founder, George Hurst, who was killed during an elephant hunting accident in 1923.  “Tusker” is a nickname for a male elephant.

Q11: A little morbid, but okay. Any other elephant facts while you’re at it?

A11: Sure.  Here are five: (1) In 1956, a contestant on the game show “The Price is Right” won a live elephant. (2) Elephants are one of the few species that can recognize themselves in the mirror.  (3) Elephants are not scared of mice as some myths suggest, but they are scared of ants and bees. (4) African elephants can distinguish different human languages, genders and ages associated with danger.  (5) Female elephants go through the longest gestation period of all mammals, with pregnancy lasting 22 months.

A12: Here are some descriptions, starting with the freshest one and ending with the 12-year-old beer:

Overall, Tusker is a bit on the honey-sweet side, particularly for a lightly flavored Pilsner. 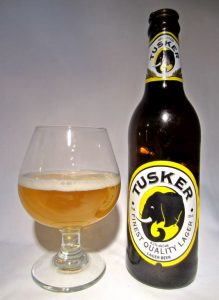 A hard pour into the center of a snifter glass barely managed to muster up a mere three millimeters of quickly fading off-white head over a clear pale apple juice-colored body.  Aromatics include a hint of dry Kix cereal, faint tupelo honey, golden corn syrup, subtle malt, a note of flour, a touch of calcium and uncooked biscuit.  Honey-forward flavor with a note of cream corn in a generally watery, but thirst-quenching, light-bodied Pilsner. Medium-high carbonation, medium-low sweetness and bitterness although absent of actual hop flavor, with an aftertaste of tupelo honey.

Tusker (Seven-Year-Old Bottle), a.k.a. “The Abused”

A touch darker in color compared to the fresh Tusker, with clearly oxidized squash-like character present throughout. 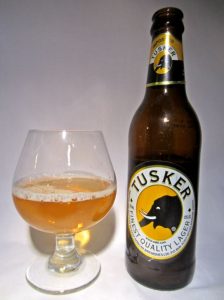 Pours a slightly hazy pale amber body forming about 1/8 inch of off-white frog-eyed head that fades in less than ten seconds.  The aroma is reminiscent of cold but cooked butternut squash with a touch of maple syrup and a pad of butter, light brown sugar, no hops and no alcohol.  Cooked squash is the main player in the flavor along with medium-sweet honey suckle nectar, watery Port wine, medium-low carbonation, no hop character, sweet graham cracker paste, Honey Smacks cereal, watery prunes, and wax paper with an aftertaste of white raisin and Port.

Compared to the seven-year-old Tusker, the twelve-year-old version was more complex and mellow, slightly darker in color with more cedar, honey and tobacco character and less squash.

So there you have it.  That’s what some old beer that was stored in a hot garage was like.  No one died.  No one hated it.  In fact, dare I say, the old beer was actually enjoyable, with the 12-year-old version scoring an 85/100… as far as aged-Tusker goes.