How to Make a Pumpkin Keg 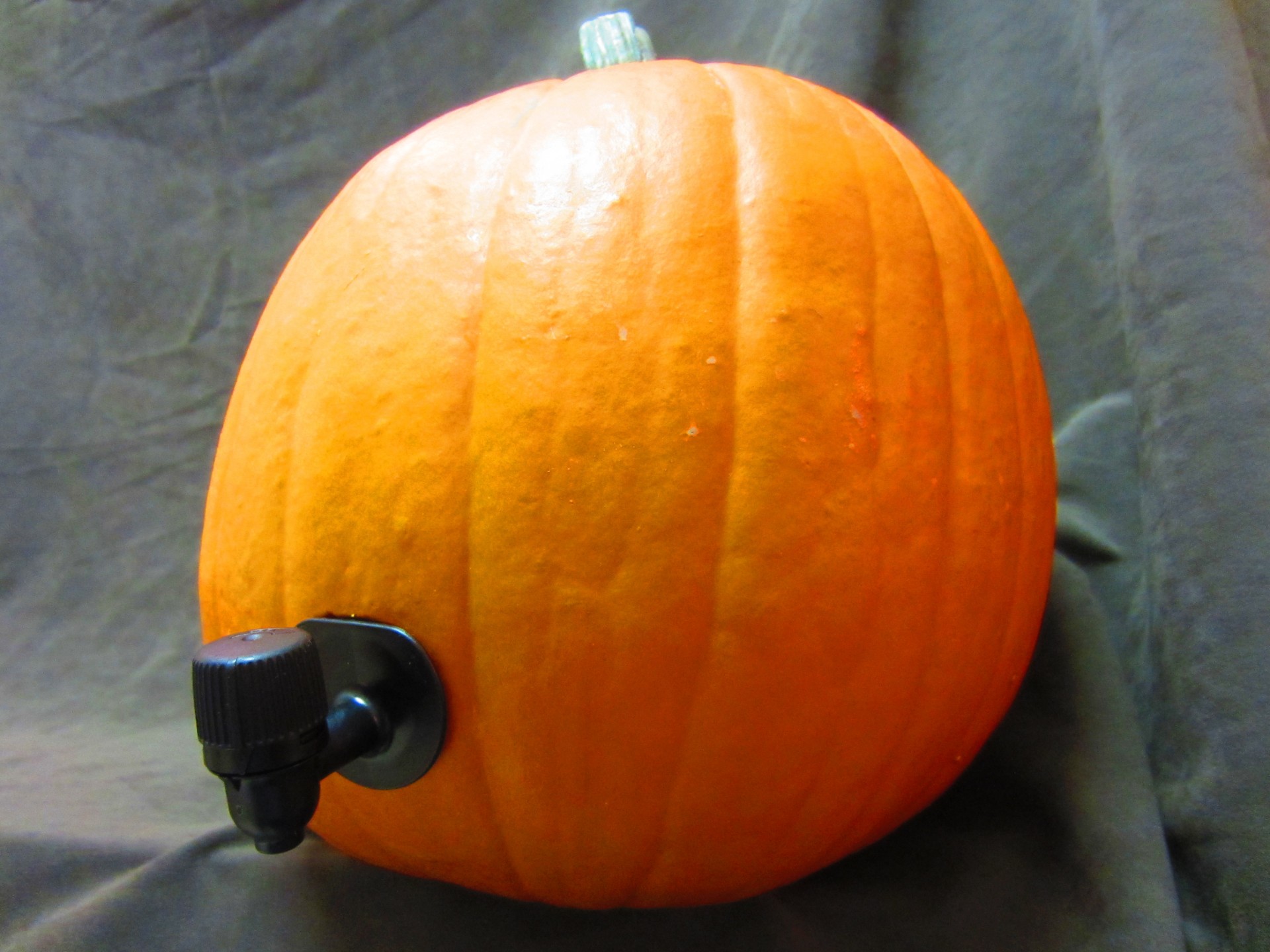 Love it or hate it, with Halloween and Thanksgiving quickly approaching, ’tis the season for pumpkin beer— and business is booming.  No longer is it just the so-called extreme-for-the-sake-of-being-extreme craft breweries busy in the brew house smashing pumpkins.  Behemoth breweries like MillerCoors (Blue Moon Harvest Moon Pumpkin Ale), Anheuser-Busch (Shock Top Pumpkin Wheat), and Samuel Adams have all kicked around the pumpkin patch to produce their own seasonal salutes to the great pumpkin.  In total, there are roughly 800 different commercial examples of pumpkin beer on the market to choose from today.  Perhaps this is part of the reason why the GABF has officially canonized “Pumpkin Beer” as a beer style all to its own; a distinction shared with no other berry on the beer style roster (yep- pumpkin is a type of berry).

The bottom line is that if you’re still on the fence about pumpkin beer, there’s no better time to head to your local purveyor of craft beer, and put together a sampler pumpkin pack.  You may discover your newest favorite pumpkin beer yet. 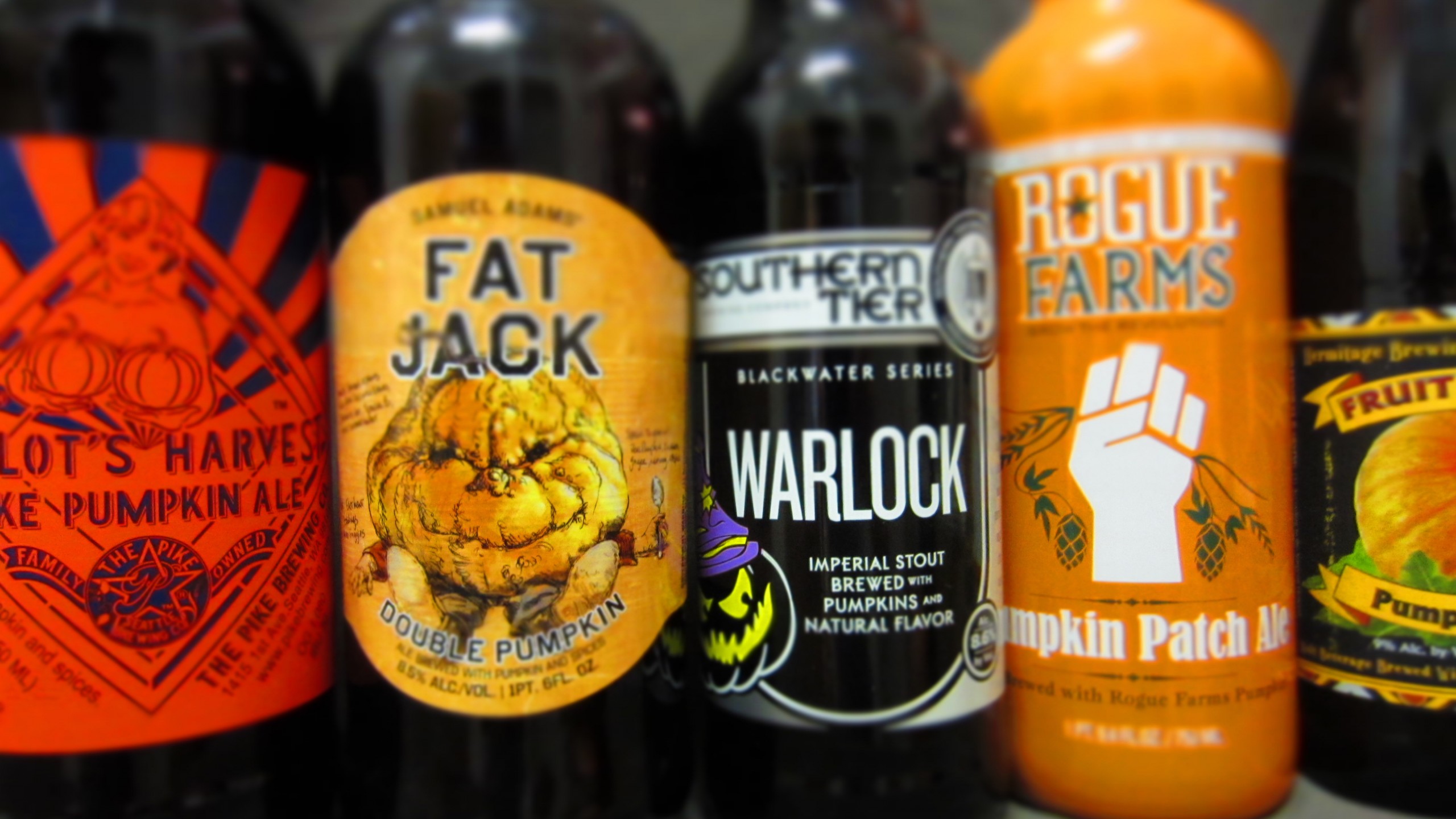 And chances are you’re either going to be invited to (or hosting) a Halloween/Thanksgiving-type event this year, or sometime in your bright and sunny future.  Sure, you could always cleverly share a 6-pack of your new-found fav pumpkin brew, but that’s only a little clever.  To really steal the show, present your pumpkin beer in style: with a Pumpkin Keg.

Not only is a Pumpkin Keg a party hit, it’s also easy to put together.

Here’s what you do:

1.  Cut open the top of your pumpkin and scrape out all its pumpkiny guts just like you would when carving a pumpkin. Keep the top of the pumpkin to use as a lid later.

2.  Using the plastic tap on your Box-O-Wine, transfer all of the wine out of its box.

3. Open the box of wine and remove the plastic bag from inside the box. 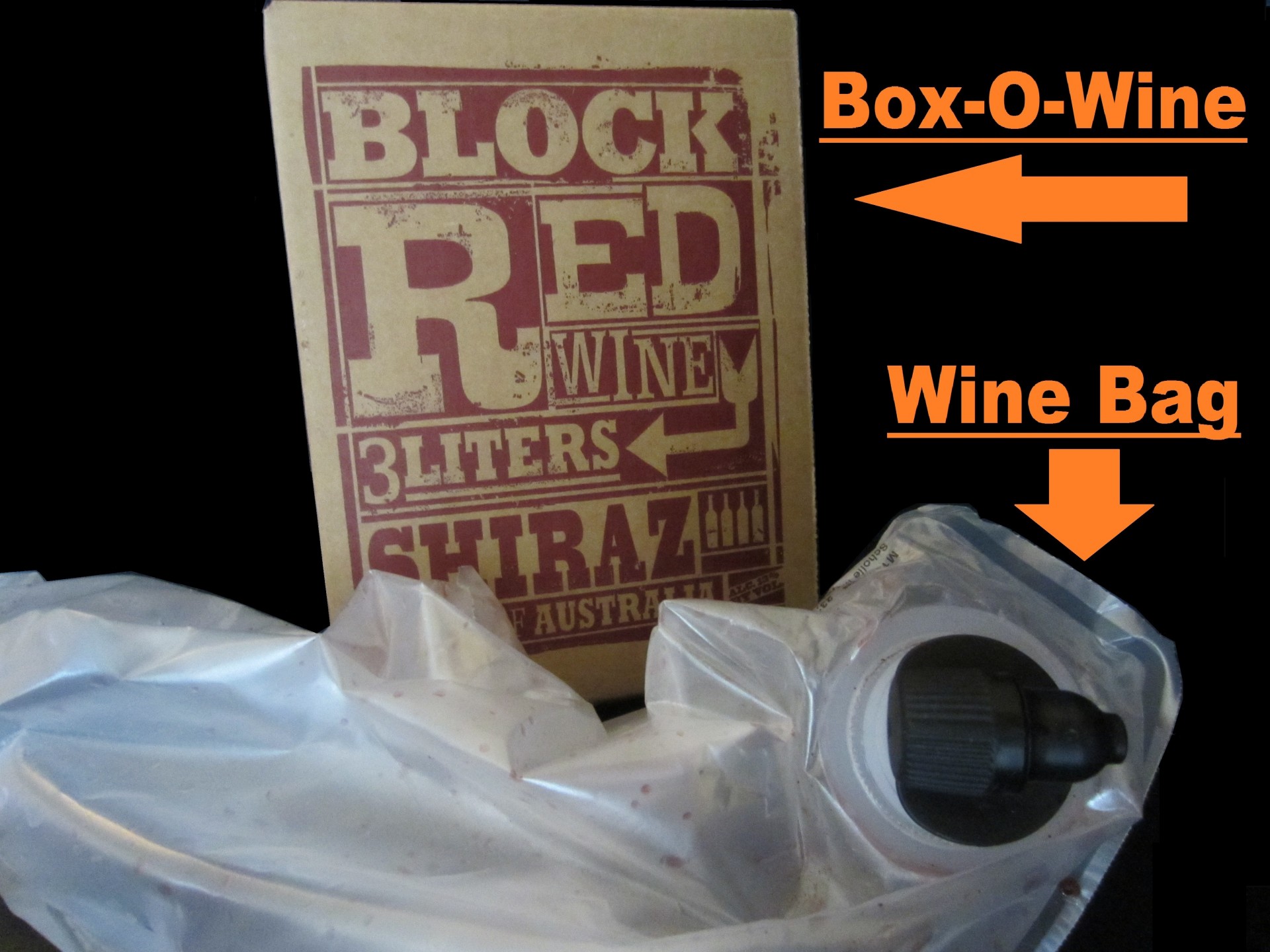 4. Cut out a hole near the base of your pumpkin that will snuggly accommodate the plastic tap. You may want to disassemble the plastic tap first (see step 6) to better determine the size of the hole you will cut. 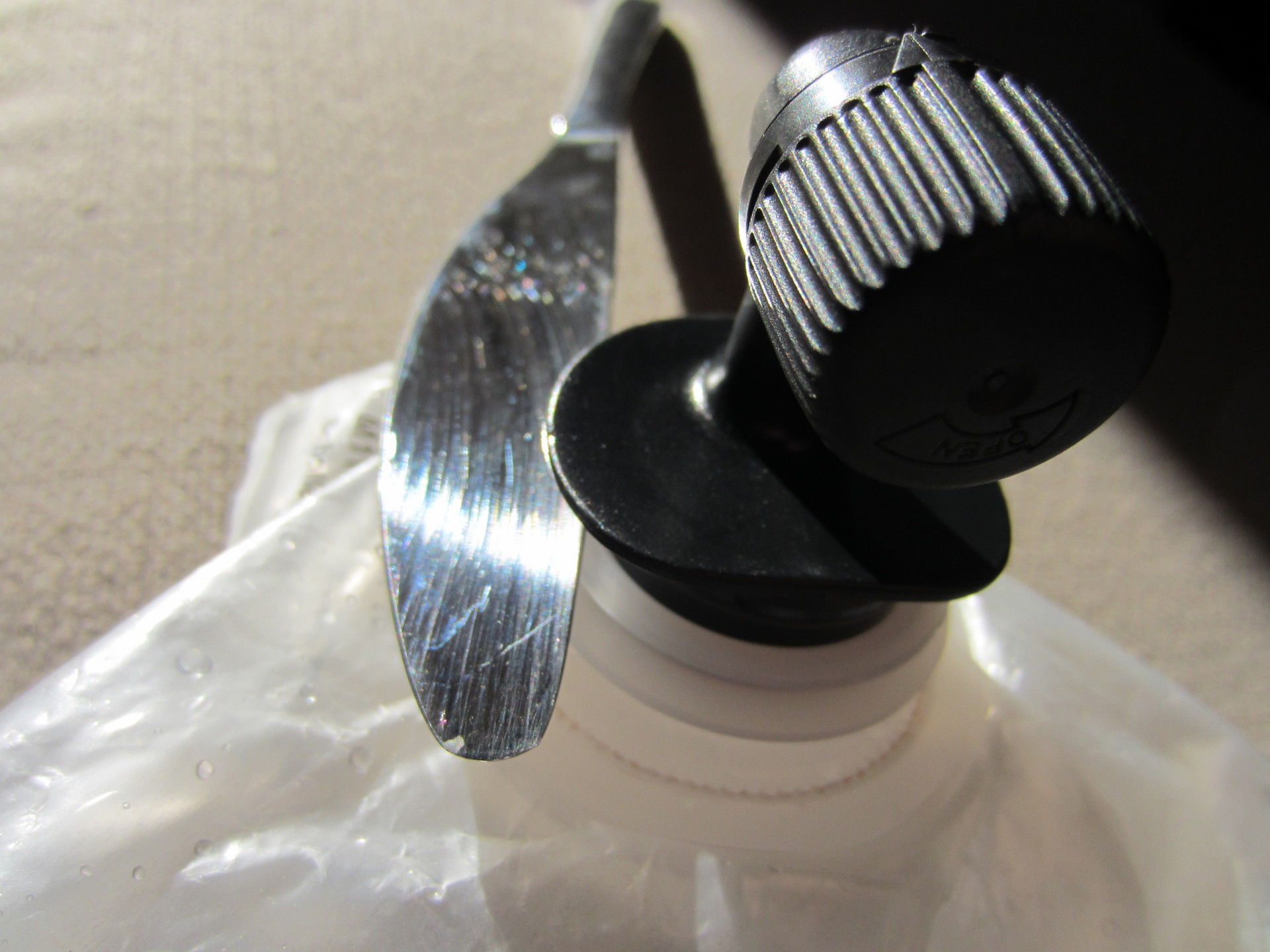 7.  Rinse out the plastic bag with water. 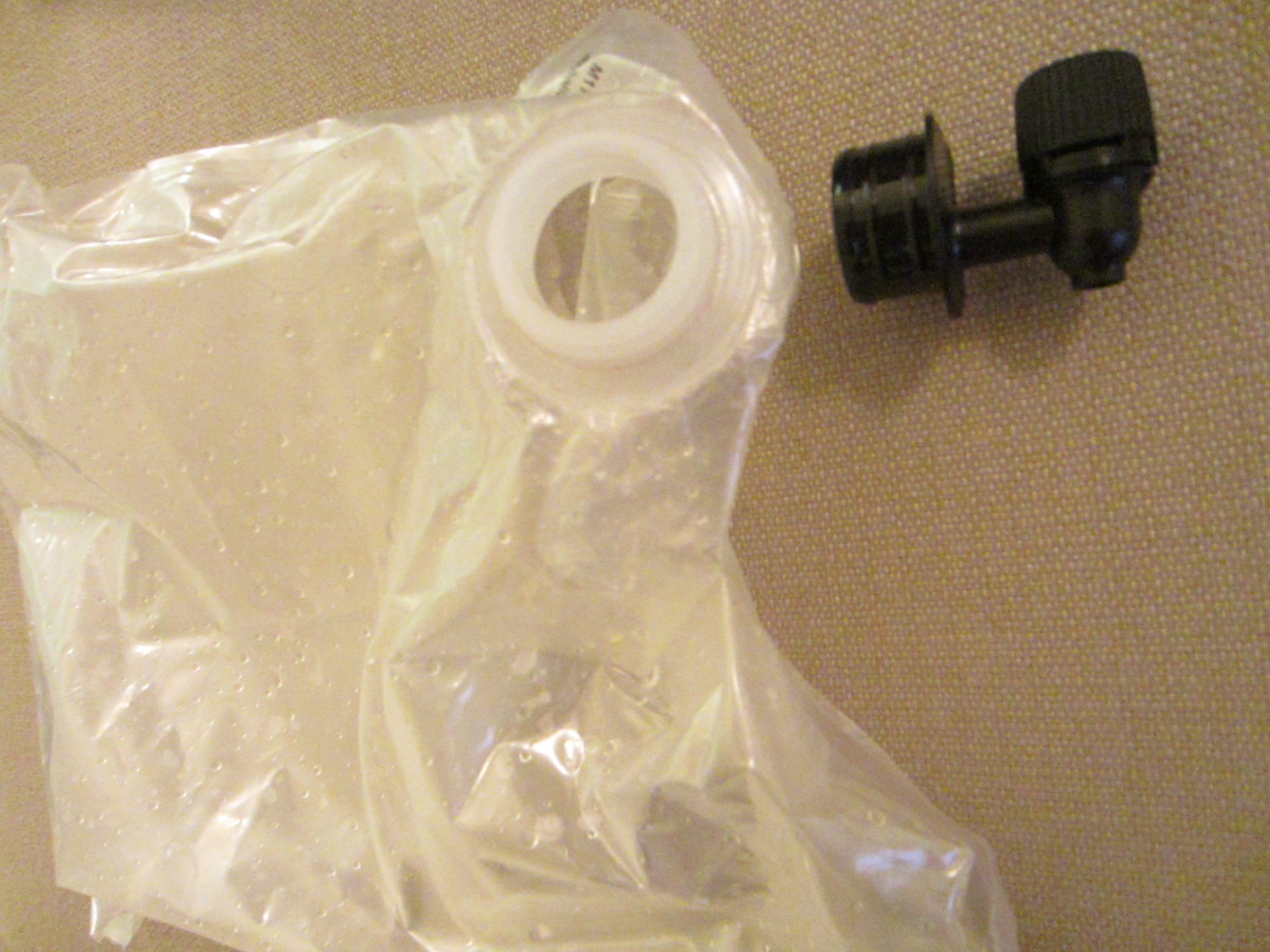 8.  Gently fill the plastic wine bag with your pumpkin beer of choice.  You can always use a plastic funnel to better guide the beer into the plastic bag, but either way, try to keep the beer as carbonated as possible by not splashing too much.

10.  Place your carved pumpkin lid on the top of the pumpkin, and your Pumpkin Keg is ready for action.

*Optional: It’s up to you if you want to further pimp-out/decorate your Pumpkin Keg; just remember if you’re carving, it’s probably best to do that before you place a filled bag of beer inside the pumpkin.

Also keep in mind that there’re 33.814 ounces in a liter, and 12 ounces in a standard beer bottle, so if you’re filling a 3 liter bag, you’ll need about 8 bottles, or 14 bottles for a 5 liter bag.  Can’t find a use for 5 liters of cheap wine?  How about polishing off a few nice bottles yourself, refilling the bottles with box wine, and then serving them to your wine snob friends.  Don’t feel bad, they deserve it.

If you want to serve more than just the 3-5 liters that a standard wine bag will accommodate, you can either collect and pre-fill other wine bags with pumpkin beer, or simply refill your existing pumpkin keg when it’s empty. In a pinch, you can just cut a hole in the top of the wine bag and pour your pumpkin beer in through the top, but this obviously isn’t as secure as the method described above.

Speaking from experience, I recommend doing a quick practice run with your Pumpkin Keg by filling the plastic bag first with water and then assembling it.  That way if you make a mistake and spill somewhere in the process, you’ve only lost some water instead of precious beer.

The idea with using a wine bag is to preserve the original flavor of the beer you’re adding by not having it come into contact with raw pumpkin flesh and also to prevent leaks.  If you’re just using a tap or spigot and you cut the hole in the pumpkin too big, you either have to figure out a way to plug the excess clearance or buy a new pumpkin.  No thanks.

But even if you don’t flame the inside of the pumpkin and simply want to add pumpkin beer to the raw flesh inside of a hallowed out pumpkin for some other reason (maybe to save time or to add some additional possible squash character to the beer), there are other problems.

For example, you can’t simply add ice to your pumpkin keg to keep it cool without worry of diluting your beer.  However, if you use the wine bag approach, you could dump ice directly over the wine bag or put the ice in zip-lock bags, and place them around the wine bag to keep the beer cool.

Oh yeah, and there’s one other problem with adding beer directly into a hallowed out pumpkin…

The other issue with allowing any carbonated beverage to come into contact with raw or roasted pumpkin flesh is that your beer will quickly become flat due to exposure to what is called “nucleation sites”.  A nucleation site is anything on a surface that causes the physical separation of liquid, solid, and gas, or for our purposes, the CO2 separating from the beer resulting in flat beer.  For a real world example of the effect of nucleation sites, let’s imagine that you’ve been served a beer in a dirty glass that has grime stuck to the inside of the glass.  A speck of grime stuck to the inside of a glass is a nucleation site, and you can tell because you’ll see a stream of bubbles jetting away from it because that grime is separating the CO2 from the liquid in your beer (bar tending no-no).  Because the inside of a pumpkin is one giant nucleation site, if you pour your beer directly into it, the beer will foam, which is your visual clue that the CO2 is separating from your beer.  Bad idea.

There is a vast diversity of different flavors within the pumpkin beer market, and because people have different personal tastes, my advice is always to try a few pumpkin beers out for yourself to see what you like.

If you’re looking for pumpkin-pie-in-a-bottle, I like KBC Pumpkin Ale from Trader Joe’s.  It’s cost-effective at $5.99 a six-pack, but it’s also a bit sweet, bordering on Pumpkin Soda.

The other difficulty with recommending a beer has to do with availability.  In other words, because the distribution of beer is very regionalized, what you might find in one state, you might not be available in another.  With that in mind, here’s our 2015 review of of 40 pumpkin beers, many of which you can find in the western U.S. (west coast), and another 2015 review of pumpkin beers from Paste magazine you might find in the South.  It’s important to read the descriptions of the beers and not just the rank to see what flavor profiles speak to you.

Now, if you’re a homebrewer with a killer pumpkin beer recipe, rack that bad boy into a Pumpkin Keg, and we’re talking the ultimate pumpkin trifecta.

By the way, find a good watermelon beer in the summer, and the Pumpkin Keg concept easily translates into a Watermelon Keg.  I also have ideas for making a Turkey Keg— just waiting on Dogfish Head to create an off-centered Turkey Beer.  Only question would be which end to put the tap…

Now that you know how to rock the Pumpkin Keg, go forth and be the king/queen of Halloween and/or Thanksgiving.  I’ll be here self-loathing, wondering how I turned into the Martha Stewart of beer.

I just keep telling myself “It’s a good thing…”

How to Make Swamp Cider