Sure, geeks might have a stronger correlation to craft beer than nerds, but that correlation doesn’t just exist in the vacuum of cyberspace.  I submit for your consideration that there are certain geeky behavioral traits that lend themselves to the craft beer culture, inducing the geek to pull up a stool at the craft beer bar.

Exhibit number one: the geek’s inherent desire to collect things surfaces in beer culture in the form of collecting and trading rare, or hard to acquire beers, or collecting any type of beeraphernalia.

Exhibit number two: The geek’s compulsion to know every detail about an in-depth, multi-layered, often technical subject with obscure backstories flourishes in the world of craft beer with its 80 “officially recognized” sub-styles of beer listed by the BJCP, in addition to ever-emerging new and rediscovered styles.  Each style of beer comes with its own, sometimes esoteric and controversial, story of origin inviting the geek to debate the merits of these possible backstories similar to the debates that arose over the actual origin of James Howlett, a.k.a. Wolverine.

Exhibit number 3.14159: Geeks tend to be obsessed with the newest, coolest thing that their subject of interest has to offer, and with more and more microbreweries, craft breweries and brew pubs popping up every year, there seems to be an endless supply of new things to know and acquire in order to better secure the geek’s place in the pecking order of geekdom as the eternal pissing match of who is the bigger fan rages on.

Exhibit number four: Geeks also love conventions, and there is absolutely no shortage of conventions within the craft beer scene.  From the Great American Beer Festival (the mecca of beercons), to the more traditional notch-on-the-belt Oktoberfest, and all the hundreds of other beerfests scattered throughout the U.S., there are so many beer conventions today that the hardcore con-fan geek stepping into beer culture for the first time will feel like they’ve died and gone to Sha Ka Ree.

Exhibit number Babylon five: Whether via cosplay or otherwise, geeks like to imagine they are the fictional heroes over which they obsess, and with a little booze in the system, I can see where one might start to confuse one’s BAC (Blood Alcohol Content) with one’s MCC (midi-chlorian count).

Finally, exhibit number six and a half: Deep in their hearts, geeks want to be accepted, and no matter how geeky or nerdy one may be, with a craft beer in your hand, you instantly gain + 5 cool points.  Not to mention that like Raj’s character on The Big Bang Theory, a little buzz helps the geek lose some of that cliché social awkwardness and/or selective mutism.

Why is geek culture attracted to the craft beer culture? Simple: Craft beer is dominated by geeks, so much so they should rename craft beer geek juice.  From homebrewers, to pro brewers, to craft beer enthusiasts, it seems more and more that a “beer geek” is not just someone who’s a really big fan of beer, but rather someone who’s already a geek but also a really big fan of craft beer.  The two subcultures have come to embrace each other so closely that it’s getting harder to detect that gray line that divides them.

And standing there with a big fat gray marker in his hand is Wil Wheaton, the hardest working man in Geekdom.  Yes, the same Wil Wheaton of Star Trek TNG and The Big Bang Theory fame recently graced the cover of none other than BeerAdvocate magazine.  Not only is Whil Wheaton the emissary of geek culture, he’s also a homebrewer. (Please don’t tell me you’re surprised at this point.)  And if that’s not proof enough of these colliding cultures, not long after Wil’s featured article in the Alström Brothers’ beer mag, Stone Brewing Co. released Stone Farking Wheaton w00tstout, a geek-themed collaboration brew from Wil Wheaton, Fark creator Drew Curtis and Greg Koch of Stone Brewing, further blurring the already blurry lines between the craft beer culture and geek culture.

Ladies and gentlemen of the digital jury, I leave you with this: As long as the internet, video games, and Apple products are still part of the mainstream, the geek will always have a seat reserved at the cool table, and their geek drink of choice will until further notice remain craft beer.  (Or Romulan Ale.) 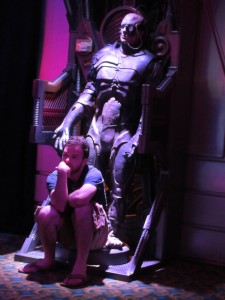 How to Brew Fruit Beer: The Case of the Disappearing Fruit