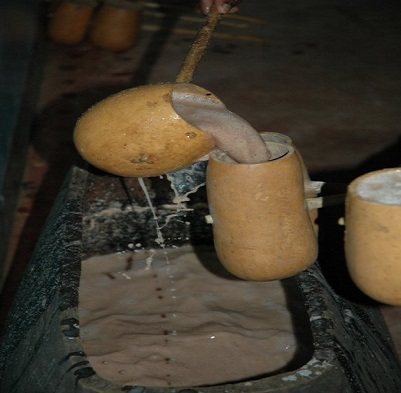 Mbege:  Traditional fruit brew of the Chagga people of Tanzania, this sweet and sour beer’s not so secret ingredient is banana.   When brewing mbege, first bananas are mashed up and cooked in a pot for six hours, cooled, and left out to spontaneously ferment in the open for seven days.  The now alcoholic banana juice is strained and combined with finger millet flour and bittered with quinine bark flour from the msesewe tree.  This mixture is then left out to re-ferment for another day before serving.

For a homebrew version of this beer, check out this recipe from the Epic-Curiosity blog.

Or just buy a bottle of Wells Banana Bread Beer, and you’ll get the general idea. 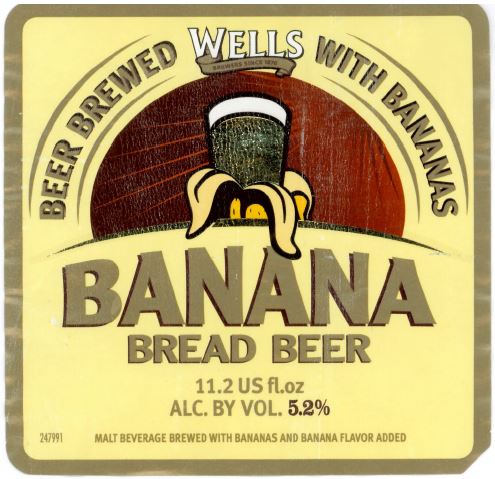 Pombe (pombé or phombe): Pombe is Swahili for “beer”, and in this case is a type of traditional East African millet beer made from sorghum, bran, corn, and sugar. Here’s British explorer Richard Francis Burton’s description of pombe when he encountered it in the late 1850’s:

“It is usually made as follows: half of the grain—holcus , panicum [types of grass], or both mixed–intended for the brew is buried or soaked in water till it sprouts; it is then pounded and mixed with the other half, also reduced to flour, and sometimes with a little honey. The compound is boiled twice or thrice in huge pots, strained, when wanted clear, through a bag of matting, and allowed to ferment: after the third day it becomes as sour as vinegar.”

Some recipes call for adding banana to pombe, as described in the book Sacred and Herbal Healing Beers by Stephen Harrod Buhne, but this seems to reflect more the mbege beer of the Wachagga (or Chagga) people of Tanzania than traditional pombe.  A commercial beer from Kenya called “Pomba” is also brewed with bananas.

On a somber side note, homebrewed pombe was recently involved in the deaths of 75 people and the hospitalization of another 177 who were attending a funeral in Mozambique back in January of this year.  It was originally suggested that crocodile bile was used as the lethal toxin in the brew as the substance is believed to be a powerful poison among Bantu-speaking people.  However, this belief is more of an urban ledged according to Zimbabwean pharmacologist, Norman Z. Nyazema, Ph.D, who proved back in the 1980s that crocodile bile has no poisonous properties whatsoever.  The toxicology report is not yet complete, but based on the symptoms (diarrhea and gastrointestinal distress), Nyazema speculates the cause to be an organophosphate pesticide like parathion which is used in farming areas around the region and is highly toxic to humans.

On a less somber note, a special type of fission yeast was isolated from and named after the East African millet beer: schizosaccharomyces pombe.  The yeast itself is said to not perform well at least with European style beers as it tends to produce increasingly noticeable sulfur characteristics over time and is generally considered to be a spoilage organism in wine.

Umqombothi: This popular thick sour beer comes to us from the Xhosa people of South Africa and is brewed with equal parts maize meal, malted corn, and crushed sorghum malt. Weighing in at around 3% ABV, umqombothi starts out by mixing the grains with four parts water in a pot and allowing spontaneous fermentation to occur overnight, similar to making a sour mash.  The next day, a portion of the wort is removed and the remaining mash is boiled down further until a crust forms, which is then left to cool for a day.  The set aside wort is then added back to the mash where additional sorghum and malted corn is added and the pot is left in a warm place to continue fermentation for about 8 hours.  The beer is then separated from the mash and poured into a communal drum for drinking.

Umqombothi is traditionally drank to mark special occasions, especially the return of young Xhosa men after they’ve been ritualistically circumcised.  That had better be some pretty darn good umqombothi!

There’s even a pop song named after Umqombothi.  It’s performed by Yvonne Chaka Chaka.  Seriously. It’s got like half a million hits on YouTube.  Chaka Chaka it out, bru.

If this is the last stop on your whirlwind tour around the world in our quest for native beer, I hope you had a little fun and perhaps might be inspired to search out some of these exotic beverages for yourself, or better yet, keep their spirits alive by brewing them in your own home!