Props to Bruce for a great tour of Maui Brewing Company today. Aloha was in the air! The company’s strong commitment to the local economy and concern for the environment was evident. Their beer is packaged solely in aluminum cans (made locally from recycled aluminum). They use local ingredients such as coconut & pineapple, and their spent grain is given to local farmers, helping contribute to local island sustainability.

The brewery, located in an industrial area just across the highway from Old Lahaina Town, is nothing fancy. Brewing since 2005 at 100% capacity, it’s just what they need – nothing more, nothing less. Although, they are expanding operations to a new Brewery and Brewpub in Kehei, about 45 minutes south east. They just broke ground three months ago. The new facility is expected to open in June of 2014 (Phase 2 in 2015). 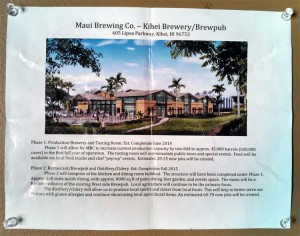 According to internet legend, the term “geek” originated from the traveling carnivals of the early 1900s where, among other bizarre spectacles, the “geek” was infamous for biting the heads off of live chickens. The term has evolved since then to embody a nearly universally embraced, largely popular, distinct subculture of modern society.

But the road to the cool table wasn’t always paved with smiley face emoticons and unicorn farts.   Much like any movement, geeks didn’t wind up at the epicenter of the new cool without their share of social bullying and ostracization.  (By the way, because there’s so much crossover, I’m basically using the words “geeks” and “nerds” interchangeably.  I acknowledge there can be some differences, so please don’t get your glow-in-the-dark Superman underwear in a knot.)

Since the days of their carny past, and up until about the end of the 1900s, geeks in the U.S. were ridiculed, harassed and generally cast as social pariahs- the very antithesis of cool.  Geeks struggled.  They gathered in quiet circles, incubated, grew, banded together, discreetly made inroads, endured and eventually came to dominate nearly every facet of modern life.  These were the geeks that were geeks before it was cool to be one.  Rebels of the mainstream.  Brainy, nerdy punks, who instead of sporting some variation of a Mohawk and spike studded black leather jackets with stitched on patches promoting anarchy and the Ramones, these geeks rocked the iconic nerd classes, mismatched outfits, and highwaters.

More so than punk, the geek subculture of old has been so Borgly assimilated into the modern cool that most people can’t go a minute without updating their fb status, snubbing non-wifi establishments,  gorging themselves on bandwidth, or showing off that shiny new i-whatever.  The forefathers of geekdom have undeniably spawned this reeling sci-fi world we find ourselves in today.  And in an epic twist of fate, it’s the OGs (original geeks) who can stand tall with their bloodied badges of honor and deliver a smoldering hot “Frak you” to the world.  Without question it’s the modern-day geek who owes a teraflop of gratitude to the geeks who came before them and helped pave the road to the mainstream.

So on behalf of all the geeks who’ve had it easy, to those OGs, I say: Qapla’.

A Geek is As a Geek Does

While it’s probably more subculturally sensitive to say that the modern usage of “geek” has come to mean someone who is passionate or unabashedly enthusiastic about something (hence “sports geeks”), it seems, however, that on the whole, geeks tend to gravitate towards a certain specific set of subject matter…  subject matter that’s just, well, geeky.  (Not that there’s anything wrong with that!)

But why craft beer? Hold on to your coke bag Freud, it’s time for some psychoanalyzing.

Like geeks, at one time brewers of beer, including craft beer, were ostracized and bullied in the U.S and abroad.  Back in the U.S. though, it wasn’t the jocks administering those character building wedgies and swirlies.  No, this time it was the Women’s Christian Temperance Movement, American Temperance Society, and all the other teetotaling, hatchet wielding maniacs the likes of Carrie Nation who blissfully dunked the heads of craft brewers in the swirling toilet that was Prohibition.  Such groups applied so much social pressure upon anyone who had anything to do with the production or consumption of alcohol that, to a degree, the entire industry (brewers included) became social outcasts.

Even worse, because the Prohibition movement was at its peak during and just after the First World War, propagandists would spew fallacious arguments insinuating that beer was the drink of “the German enemy”, and somehow money spent on beer went to aid the enemy.  So now not only was it unpatriotic to drink beer, it was an act of financial terrorism.  (Just thinking about that makes me hungry for some Freedom Fries…)

From 1920 to 1933, people in the U.S. witnessed as the once-thriving craft beer industry was recklessly flushed into near extinction.  Prior to the so-called “Great Experiment” of Prohibition, nearly 4,000 breweries were in operation in the U.S.  But by 1932, that number had dwindled to fewer than 200. And though one might think the 21st Amendment, responsible for repealing Prohibition in 1933, was the end of the plight of the brewer, a critical oversight occurred which severely stunted the growth of the craft beer movement in America for nearly forty-five more years.

You see, much like the origin stories of so many of the greats of  modern geekery, brewing beer is a hobby that often originates in the garages, basements, and college dorm rooms across the United States.  Without homebrewers, the craft beer revolution probably would have never taken place, at least not as we know it today.

And while it’s true that the 21st Amendment repealed Prohibition and allowed for the legalization of home wine making, in an epic fail of our legislative system, home beer making was mistakenly left out of the law.  Take a second to imagine where we’d be today if there was a law that said “NO ONE is allowed to build computers or software UNLESS done so on the premises of a commercial computer or software business”.  At the very least, you could kiss Apple, Microsoft, Google, and yes, even our beloved Facebook goodbye.  Is it any wonder that for generations only the mega corporations of brewing were the ones defining what American beer was?

Thankfully though, it seems that we’re finally starting to shake that fizzy, watery, yellow, flavorless hangover.  A credit which in large part goes to the patron president of homebrewing, Jimmy Carter, who in 1978 signed H.R. 1337 into law, effectively legalizing the brewing of beer at home.  But for some 58 years, and certainly during the early days of Prohibition, homebrewers were outcasts, at least legally, and it’s partly in this sense that both brewers and geeks share a common heritage.  And since most craft beer brewers started out as homebrewers, without the legalization and acceptance of homebrewing, there would be very little craft beer culture in America today.