Back in December of 2012, Ommegang officially announced its collaboration with HBO to roll out Game of Thrones-inspired beers, with the first of its kind, “Iron Throne Blonde Ale”, released in March of 2013 just ahead of the series season 3 debut on March 31.

Fast forward to 2019, and as the eighth and final season of the popular Game of Thrones series draws to its dramatic conclusion, it also brings with it five limited-release GoT-themed beers, the latest and perhaps last in a total of fourteen different brews produced since the initial launch.

By the way, if you missed out on some of the GoT-inspired beers from seasons past, apparently Ommegang’s got Melisandre working some resurrection magic back in the brewhouse because a few of them are about to get brought back to life.   Recently announced on its Instragram account, Ommegang will be re-releasing three previously retired fan-favorite GoT brews (Take the Black Stout, Fire and Blood Red Ale, and Winter is Here Double White Ale) all in time for the holidays 2019 in a gift pack along with a GoT commemorative glass.

It’s still not confirmed if Ommegang will be releasing future GoT-inspired brews to accompany any of the upcoming GoT spin-offs, though our money is on yes they will.

But enough about the future and the past, let’s get back to the beers of right now.

Four of the five final season brews pay homage to four epic Game of Thrones characters who managed to survive to season eight, namely Daenerys, Cersei, Jon Snow and Tyrion Lannister.  The fifth brew is a tribute to whoever the final occupant of the Iron Throne will be.

Speaking of which… In true Game of Thrones-like fashion, we at Beer Syndicate pitted each of the final five brews against each other in a brutal trial-by-combat taste-off to see which beer is most worthy to be placed in the built-in cup holder affixed to the Iron Throne.

And whichever character’s beer that stands victorious is our pick for who will take the Iron Throne.

BREWERY DESCRIPTION: Complex and compelling, yet delicate and refined, For the Throne is our tribute to the final occupant of the Iron Throne. This strong golden ale is co-fermented with Pinot Grigio and Viognier grape juices, then bottle conditioned with Champagne yeast.  The beer pours a striking golden copper with a fluffy white head. Aromas of honeysuckle and toasted grain mingle with notes of pear and apricot. The finish is clean and dry, with vibrant effervescence. For the Throne is an ale fit for royalty. 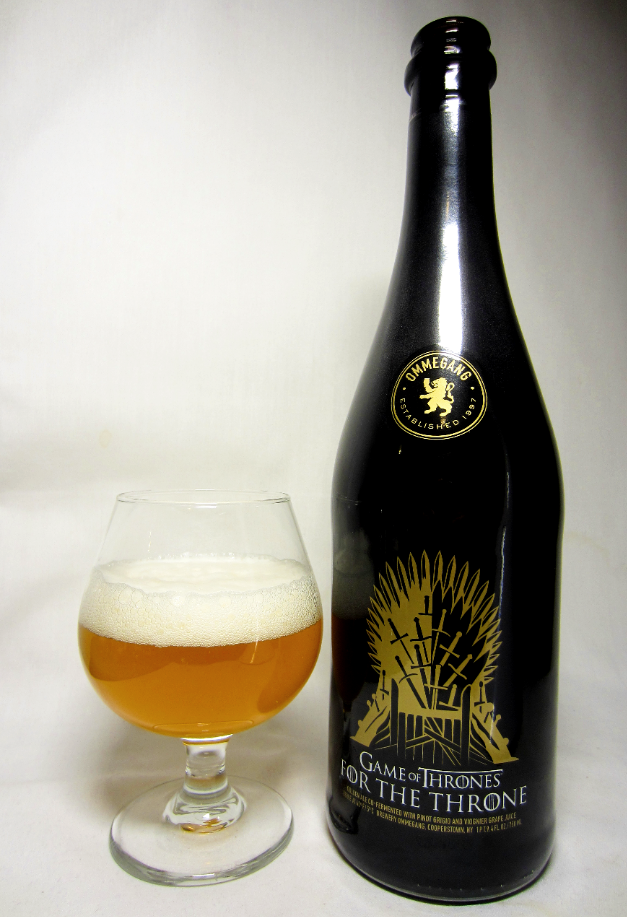 BREWERY DESCRIPTION: Inspired by Daenerys Targaryen, this blend of a smoked porter and a Belgian kriek represents the smoke and fire that Daenerys has unleashed on her opponents during her ascent to conquer and rule the seven kingdoms. “Mother of Dragons” — a beer for Daenerys — is a richly complex blend of smoked porter and Belgian kriek. It pours a deep ruby-brown with alluring aromas of tart cherry, dark roast and hints of smoke. 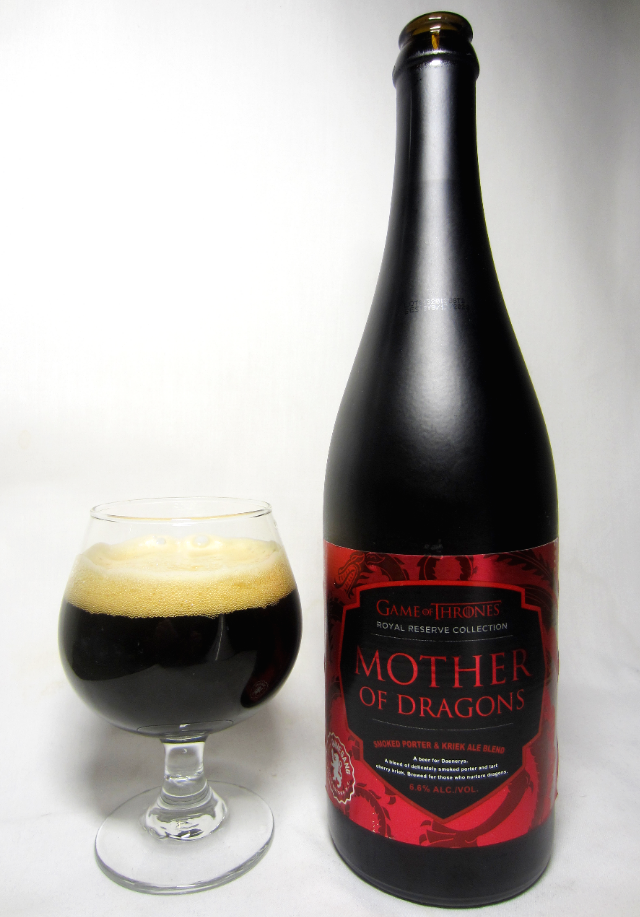 QUEEN OF THE SEVEN KINGDOMS: BLEND OF SOUR AND BLONDE ALES

BREWERY DESCRIPTION: A special blend of Belgian sour ale and Belgian-style blonde ale, Queen of the Seven Kingdoms reminds us that to Cersei, everyone who isn’t us is an enemy. 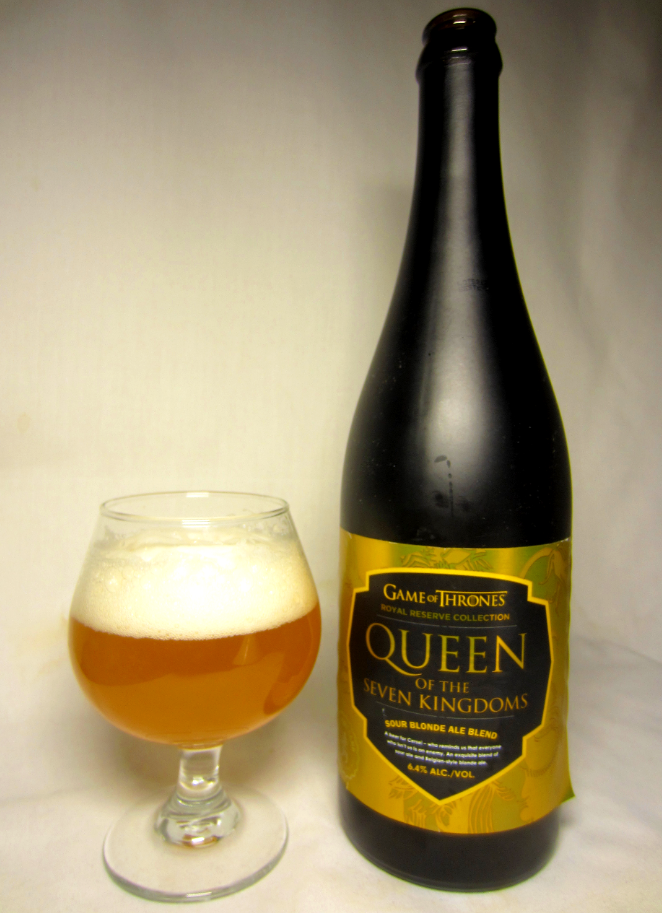 BEER SYNDICATE REVIEW: Rightfully billed as a blend of a Belgian Blonde and a sour, Queen of the Seven Kingdoms is brilliantly executed, though for a beer inspired by Cersei, one of GoT’s greatest villains, it’s somewhat easy on the sour for being a sour Belgian Blonde ale.  (See what Ommegang did there– Cersei. Sour blonde ale.  Yep.)

Nowhere near the intense sourness of a straight Belgian Lambic, the tart component of Queen of the Seven Kingdoms is approachably restrained allowing the Belgian Blonde component to shine through, ultimately resulting in a masterful success.

BREWERY DESCRIPTION: A beer for Jon Snow – a dark and brooding imperial stout has always been bold enough for normal times, but now that winter is here, something bigger and bolder is needed for the long, dark night. Thus, we enlisted the help of barrels and time to produce King in the North, a rich, bold, barrel-aged imperial stout unlike anything we’ve brewed before. 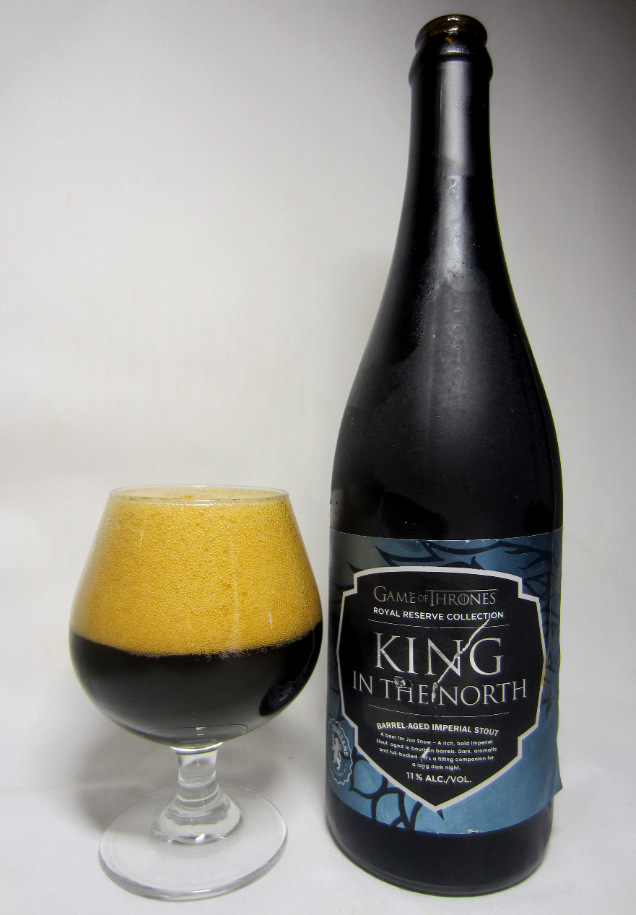 BEER SYNDICATE REVIEW: Pouring a huge moosey khaki head over a pitch black body, King in the North is a straight-forward imperial stout delivering aromas of chocolate wafer cookie, marzipan, chocolate pudding skin, Grape-Nuts cereal, mild Bourbon barrel, and a hint of vanilla and root beer, all of which do well to mask an undercurrent of clean vodka-like alcohol.  Although not a viscousy, woody chocolate-bomb, flavors of dark chocolate are present along with dark roasty malt, a hint of vanilla from the barrel aging, root beer barrel candy, a touch of molasses and big alcohol in this medium-full bodied medium-sweet imperial stout which should only become smoother with age.

HAND OF THE QUEEN: BARLEYWINE ALE

BREWERY DESCRIPTION: A beer brewed for Tyrion. As one who knows and loves wine above all, and as his court brewer, we would brew him one. Hand of the Queen is a big, bold barleywine fit for those who seek knowledge and truth, both great and small. 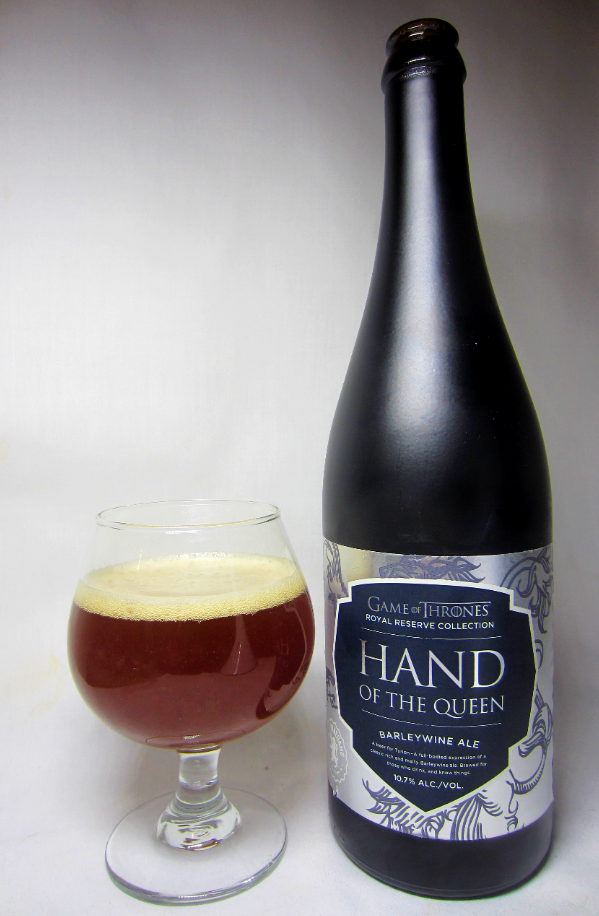 So there you have it— The Hand of The Queen Barleywine Ale is that last beer standing.

And if this taste-off death match is any clue as to who will ultimately sit on the Iron Throne, it’s the perhaps less likely candidate Tyrion Lannister.  But of course in the often jarringly unpredictable world of Game of Thrones, the unexpected is to be expected.