Like Moore’s Law applied to brewing, the number of variations in craft beer seems to double every two years, which can leave the modern consumer moderately perplexed when happening across the next Kentucky Bourbon Barrel-Aged Double Decoction Trappist Imperial Gueuze dry hopped with Woodruff and blended with Russian River’s Supplication. (A concoction courtesy of The Craft Beer Trend Predictor.)

Long gone are the days when the average beer consumer could get by with the notion that somehow the true essence of any beer could be discerned via the all-revealing dichotomy of “domestic” or “import”.  Alas, in order to meaningfully talk about beer nowadays, it is virtually impossible to do so without referring to and having a general awareness of the basic beer styles.  And because beer, like mathematics, builds upon itself, if you missed the basic algebra of beer styles, you’re probably gonna run into some trouble when it comes to the present day calculus of beer.  So let’s take it back to beer basics in an attempt to demystify the oft esoteric realm of modern craft beer.

Ask the average craft beer fan to name their top five favorite styles of beer, and they might say something like IPAs, Porters, Belgians, Sours and maybe Wheat Beers. Ask that same question prior to 1977, and it’s doubtful anybody would have known what you’re talking about. Well, anybody except Michael Jackson.  Fine, I’ll say it: No, not Michael Jackson the pop singer, Michael Jackson the beer guy from England— the apparent real-life inspiration for Michael Bolton’s character from the movie Office Space.

Michael Jackson (the beer guy), flat out invented the term “beer styles” more or less as we understand it today when he first introduced the concept back in 1977 with his vastly influential book The World Guide to Beer.

That’s right; the term “beer styles” is no older than Orlando Bloom and is just as made up as Legolas of the Woodland Realm.

To be clear though, classifying and differentiating beer is not a new concept by any means. An ancient Sumerian tablet dating back to 2050 BC turned out to be a receipt for beer, documenting that the purchaser received a “best” ale, which suggests there were at least two “styles” of beer back then: “best” and “not the best”. 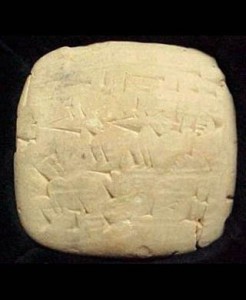 [Sumerian tablet dating back to 2050 BC is actually a receipt for beer.  The text translates as “Ur-Amma acknowledges receiving from his brewer, Alulu, 5 sila (about 4 1/2 liters) of the ‘best’ beer.”]

Nevertheless, it is unlikely that at any point in history were beers more systematically and extensively classified as they are today, a trend which is most likely to continue until Armageddon, i.e. April 21st, 2053.

Not long after the release of Jackson’s seminal book, the BJCP (Beer Judge Certification Program) was created, an organization known for defining and judging world beer styles.  Beginning in 1985, the BJCP ran with the idea of beer styles (supplemented by Fred Eckhardt’s book The Essentials of Beer Style in 1989), and as of 2008, has “officially” recognized 23 classic styles of beer, and 80, yes 80, sub-styles which fall under the 23 classic styles. I say “officially” because as of the time of this writing, 80 is the number that the BJCP has acknowledged as significant enough to be deemed worthy of appearing on its list.  The reality is, though, there are quite a few well established sub-styles of beer being brewed today which haven’t yet been canonized by the BJCP (just in case 80 wasn’t enough to keep track of).

You probably noticed I’m throwing around the terms “style” and “sub-style” without having given much explanation as to what the difference is with respect to beer.  To be sure, the use of this predominately BJCP nomenclature is purely conventional and is used as an organizational tool for the purpose of categorizing beer.  For example, according to the BJCP Style Guide, India Pale Ale (IPA) is a “beer style”, and American IPA is a “sub-style” of IPA.  In fact there are actually three sub-styles of beer which fall under the style of IPA: American, English and Imperial IPAs. Notice that these sub-styles don’t only refer to a specific country like the U.S. or England, but also to the qualitative nature of a beer as with the Imperial IPA which is basically a stronger version of an IPA (American or English) in alcohol content and usually in hop and malt character as well.  To make a quick comparison, you might think of the Hot Dog as being a “style” of American Food, and Chicago, New York, and Chili Dogs as being “sub-styles” of the Hot Dog.  Hungry yet?

On the whole, the BJCP tends to take a mixed approach in defining beer styles by either country of origin like the “American Ale” style category which contains only beers originating from the U.S., or by common sensory characteristics shared by a group of beers such as “Sour Ale” which includes sour beers from multiple countries.  True, this method of grouping beers may sound a bit inconsistent, but there is one simple little trick you can use to categorize almost every one of the 80 “classic” beer sub-styles that appear on the BJCP’s list.

80 Sub-Styles of Beer on the Wall: The Big Picture

Even though 80 sounds like a pretty daunting number of beers to familiarize yourself with, there are basically only three main types of beer under which pretty much all of the 80 sub-styles fall: ale, lager or hybrid.  For simplicity’s sake, ales and lagers are distinguished by the two different species of yeast used to ferment the beer: Saccharomyces cerevisiae (ale yeast) and Saccharomyces pastorianus (lager yeast). Generally, ale yeasts ferment at warmer temperatures producing beers that are often described as more flavorful and sometimes fruity (estery), whereas lager yeasts ferment at cooler temperatures commonly producing cleaner, crisper beers.

Ok, so the difference between lagers and ales has to do with the two different yeast strains used to ferment said beers, namely ale yeast and lager yeast.  Easy enough. So does that mean “Hybrid” beers are a hybrid or a mix between the ale and lager yeast strains?  No.  Hybrid beers, at least according to the BJCP, are not distinguished by different kinds of yeasts, but rather the process of how those yeasts are used during fermentation. This is simpler than you might think. Remember a couple sentences back when I said that ale yeasts are typically fermented at warmer temperatures, and lager yeasts are fermented at cooler temperatures?  Well a hybrid beer does the opposite of this and ferments ale yeasts at cooler temperatures and lager yeasts at warmer temperatures, yielding lagers with ale-like characteristics and ales with lager-like characteristics.  Yep, it’s that simple.  But just in case you’re like me and appreciate pictures to help explain things, here’s a color-coded diagram that illustrates just what we’ve been talking about (click to enlarge): 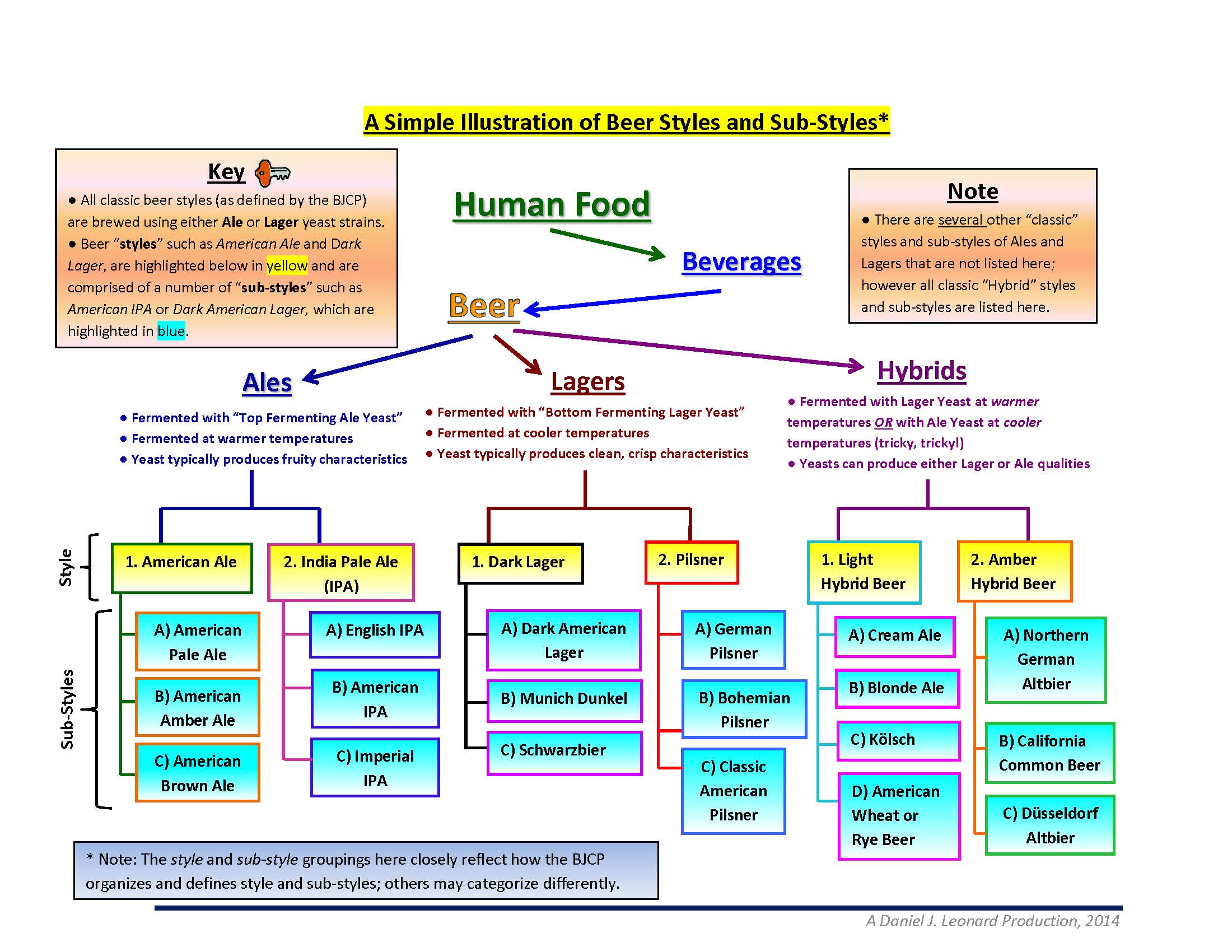 This has been your crash course in the algebra of beer styles.  If you feel you’ve got a somewhat better understanding of beer styles and sub-styles, then I’ve done my job.  But again, this was just the algebra of beer styles and I’ve intentionally left a lot of meat on the bone.  But for now just relax, enjoy your summer break while kicking back with your favorite sub-style of beer, and when we come back, we’ll dive into the a calculus of beer styles.  By the time we’re done, I’m confident you’ll be able to deconstruct every piece of some of the most convoluted varieties of beer on the shelves today, not to mention the hypothetical ones like “Kentucky Bourbon Barrel-Aged Double Decoction Trappist Imperial Gueuze dry hopped with Woodruff and blended with Russian River’s Supplication.”

And just when you think you’ve got it all figured out, we’ll pull the rug out.

Top 40 Ways to Improve Your Homebrew

Admit it: No matter if in a DeLorean, TARDIS, or a hot tub, we’ve all thought about what advice we might give our younger selves if we could go back in time. Aside from handing your past-self a copy of Gray’s Sports Almanac: Complete Sports Statistics 1950-2000 (#1.21gigawatts), you’d probably want to know what you could have done to improve the quality of your beer from the very start of your burgeoning homebrewing career. (Obviously.)

Below is a list that would have been a veritable goldmine to me when I first started brewing, so past-self, if you get this, you owe me… And you can start pay me/us back by investing in Apple stock, anything under $100 a share, and then sell when it gets to around $650— no need to get greedy.  Then, not only could we brag about getting in on Apple before its historic run-up just like all the other dime-a-dozen fish story tellers of the modernized hipster Gordon Gekko variety, but we’ll also finally have the start-up capital we need to open our very own, well funded, state-of-the-art super brewery.  But we’ll need some inspiration first…  Got it.  Book us a brewery tour of, say, Europe (Belgium first, please), where we can undertake extensive “research” into the finer points of beerology. Thanks past-self, you’re the best!

So without further ado, here are the top 40, yes 40, ways to help any homebrewer improve upon their craft. And for those of you just getting started, consider this article a giant life hack into the wonderful world of homebrewing. [A little disclaimer: By no means is this list the end-all be-all of tips to becoming a brew god, nor is tip # 15 necessarily better than tip # 20, so please don’t get irked that ‘Always use Glass Carboys instead of Plastic Ale Pails’ or ‘Kegging is Better than Bottling’ didn’t make the list.] Alight, so without further-further ado…