Strange Brews: Odd Things to Add to Your Beer That Actually Work

By now, you’ve probably seen beers being served with garnishes like orange slices (Blue Moon), lime wedges and salt (Corona), and maybe even a scoop of vanilla ice cream (Guinness).

But what would you say about a beer served with roasted garlic, dill pickles, capers, cucumber, fresh cilantro, feta cheese, and avocado?

I know, I know.  I forgot jalapeños.

Well at least one place in Tucson, Arizona has figured out how to make it work with downright delicious results.

Usually this is the part where fellow craft beer enthusiasts chime in with something about how a beer should stand on its own, or how adding anything to beer is a malicious act of pure unbridled blasphemy.   And for the most part I agree.  Buuuut, when your base beer happens to be BMC (Bud, Miller, Coors) or any other light lager (in this case it’s Dos Equis lager), you’re kind of working with a blank canvas to begin with.  Not to mention, BMC aren’t exactly considered craft beers. 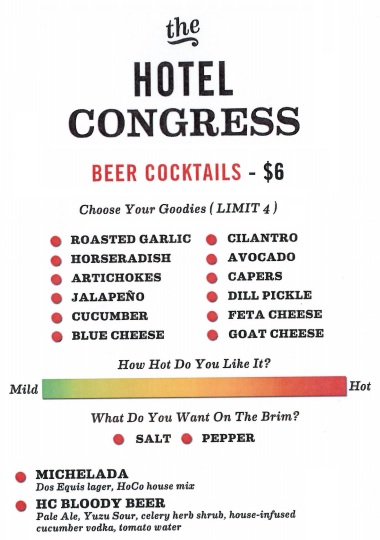 [The Hotel Congress is not only allegedly haunted, but is also the location of where John Dillinger, one of the most notorious bank robbers in U.S. history, was captured in 1934.  The hotel also serves one of the best breakfast menus in Arizona.]

To be fair, the beer cocktail that the Hotel Congress serves has a bit of spiced tomato juice mixed in with it, so the final product is more of a pimped-out Michelada than anything else (you can even chose your preferred level of spiciness).

But who’s to say adding a salty dill pickle spear with a touch of cilantro wouldn’t stand to improve a can of Natty Light or Milwaukee’s Beast?  I bet adding an orange slice to a beer sounded a touch kooky once too.

And on that note, here are a few other easy-to-make beer blends/beer cocktails that turn out pretty darn tasty (assuming you’re starting with a BMC-type beer).  Just remember to blend the proportions to your own liking:

If you have any weird but tasty beer blends of your own you’d like to share, we’d love to hear ’em, so feel free to comment below.