Craft Beer Means IPA: ROUND ONE 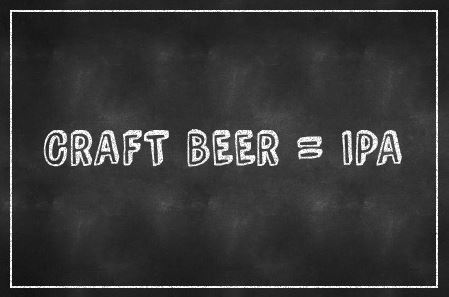 Among the craft beer community, there is a worry that the more that Americans obsess with IPA and its many mutations (DIPA, IPL, Rye IPA, Red IPA, White IPA, Black IPA, Session IPA, etc.), the more the term “IPA” is evolving into just another term for “craft beer”.

You might have sensed signs of this bubbling up here and there over the last few years.  Here are a few possible related misconceptions you may have encountered in passing:

1. If you say you like craft beer, that must mean that you love IPA, and/or your favorite style of beer is IPA.

2. Craft breweries must brew IPA or make it their flagship beer in order to be successful.

3. If you have craft beer on tap, it must include IPA to attract customers.

4. Loving IPA means that you truly understand craft beer and can be accepted as part of the craft beer culture.

5. The U.S. has a reputation for being in-your-face and extreme, and IPA, the Red Bull of beer, embodies that American attitude. In other words, IPA is ‘Merica. 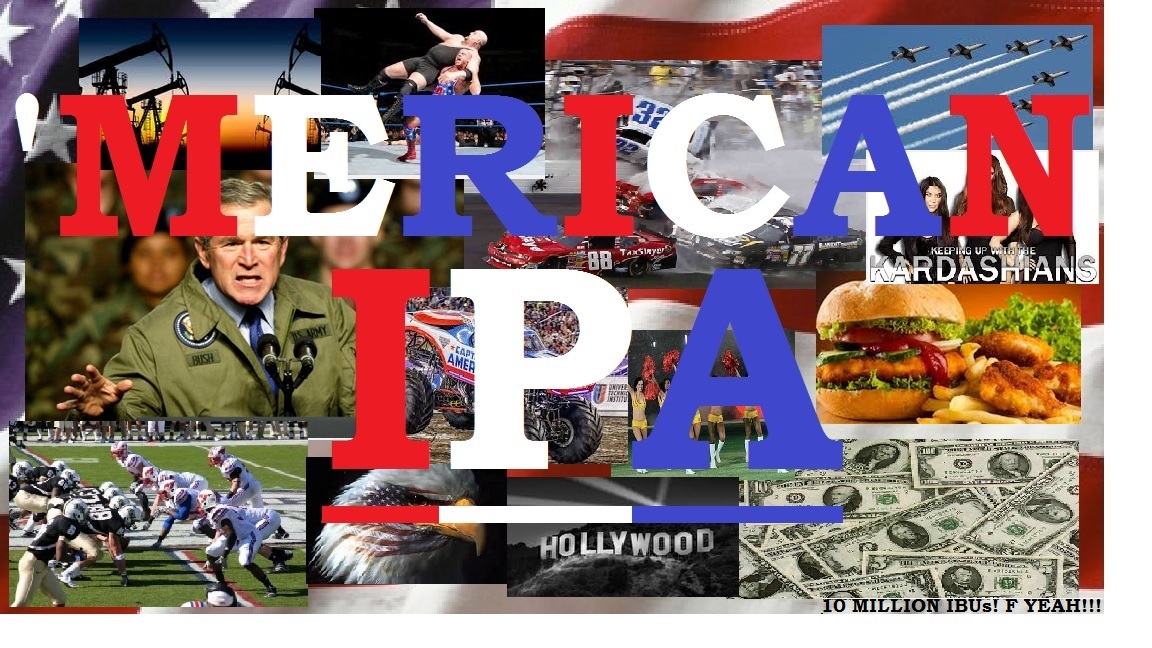 Of course if “IPA” is just another term for “craft beer”, you might see how some of above statements would make more sense.

But how did this idea come about and is there any truth to it?  And so what if “IPA” is just another term for “craft beer”?  Is there really any harm to it?

Without a doubt, IPA in all of its various incarnations has been and currently is very trendy, at least in the U.S.

With approximately 8,522 examples of American IPA currently listed on BeerAdvocate, the data suggest that IPAs are the most commonly produced style of beer by breweries.  For comparison, the next closest commonly brewed style of beer by number of examples is another hoppy style, American Pale Ale with approximately 5,883 examples, followed by American Amber/ Red Ale with 3,596 examples.

While it’s true that the American light lager style of beer is the most widely mass-produced beer on the planet by volume, IPAs still represent the most popular style of “craft beer” brewed by the greatest number of breweries, most of which are in the U.S.  This trend could be seen at the Great American Beer Festival (the world’s largest beer competition) where since 2001, American IPA has been the single most-entered category of beer.

And with certain well-known hop-centric breweries like Green Flash, Lagunitas, Stone and Sierra Nevada expanding and opening up brewing operations on the east coast presumably in order to offer the freshest hop-tastic experience to the consumer, the volume of IPA being brewed is also increasing, thereby increasing the chances that “craft beer” will be even more strongly associated with “IPA”.

Not to mention, with Stone Brewing Co. scheduled to open a new brewery in Berlin, Germany and producing many of their hop-forward brews for which they’re known, much of Europe will soon have an opportunity to associate “American craft beer” with IPA, or aggressively hopped beer of some type.

Did I mention that there’s even an official IPA Day (August 7)?  Give it a few years and maybe IPA will buy-out the 4th of July.

But how could it be that someone might make the leap in logic that “IPA” is what people mean when they say “craft beer”?

Imagine that there’s a person in the U.S., let’s call him Joe, and Joe has only drank or has only been exposed to light lager— think Budweiser, Miller, or Coors (BMC).  Joe doesn’t know that what he’s been drinking up to this point is called “light lager”, and he is not aware that there are any other types of beer other that BMC, or beers that are very similar like Schlitz, Pabst, Michelob, Keystone, Labatt, Molson, Milwaukee’s Best, Yuengling, etc.

Because Joe does not know that BMC are making the same style of beer (American light lager), Joe only knows to call what he’s been drinking “beer” and that there are different brands that make a very similar product.  So from Joe’s point of view, beer (light lager) is what beer tastes like, and anything that is not like light lager therefore does not taste like “beer” and, by extension, is not beer.

Now imagine Joe walks into a restaurant or bar and asks what beer is available on tap.  The bartender’s response goes something like this: “Well, we have domestic beer like Bud, Bud Light, and also craft beer like IPA.”  Given the popularity of IPA in the U.S., there is a good chance IPA would be on draft.  Joe orders the IPA, takes a sip, and begins to create a new mental category for beer: regular beer and craft beer, or craft beer and not craft beer.  “Craft beer” is bitter and strongly flavored, while regular or “not craft beer” is light, watery and fizzy.

Now picture this phenomenon occurring so much so that “IPA” becomes synonymous with “craft beer”.

The point is this: as people, we tend to categorize in order to better understand the world.  In the case in question, something has gone wrong because when a person should recognize that “IPA” is just one style of “craft beer”, they instead understand “IPA” to mean “craft beer”.  This type of phenomenon is what philosophers refer to as a “category-mistake”, and happens more than we might think.

As a personal example, the first time I sampled someone’s homebrewed beer many years ago, I made the mistake of thinking that “homebrew” was a category or style of beer on par with light lager or stout.  At that time, I was only familiar with light beer and dark beer, and therefore these were the only two categories which existed in my mind to understand the world of beer.

Once I tried a homebrew, I created a new mental category of beer so now there were three types of beer: dark beer, light beer, and homebrew.   By the way, the homebrew I sampled was an example of a Strong Scotch Ale (a malty Scottish style of beer), so whenever I had a malty beer for a while after that, I would say that it tasted like homebrew.

The mistake I made was not realizing that “homebrew” was not a style of beer, but that homebrew, like home cooking, simply means a beer of any style, be it light lager, stout, etc., that is made at home.  The other problem was that I didn’t realize there were any other styles of beer except dark and light beer.  This might sound silly to modern day craft beer fans who are familiar with the different styles of beer, but if someone is not introduced to how beer is formally categorized, most notably the BJCP Style Guidelines, then one begins to create their own framework in their mind.

IN DEFENSE OF JOE

If you feel like there was something missing from the account above of how the term “craft beer” could mistakenly be equivocated with “IPA”, there was.

It stands to reason that Joe would have a capacity to incorporate different varieties of beer into his mental framework from the fact that there are different brands, namely Bud, Miller, and Coors, and he might even be able point out subtle flavor nuances between the brands.

In addition, if Joe had been drinking beer in the U.S. sometime after 1972, there would be an increased likelihood of him becoming aware that there was a standard American lager like Miller Genuine Draft, and then a lighter version called Miller Lite.  [Miller introduced Miller Lite in 1973, Coors Light was created in 1978, and Bud Light came out in 1982.]  So not only would Joe potentially have categories for the different brands, he may also have categories for “regular beer” and “light beer”.

But this alone would not necessarily prevent Joe from equivocating “IPA” with “craft beer”.

Even so, is it really reasonable to believe that a person like Joe exists in the U.S. nowadays?

I don’t think so.

In order to break down the argument that Joe has no idea that “craft beer” is equivalent to “IPA”, we would just need to show that chances are that Joe has encountered at least two different styles of beer produced by any craft brewery.

If Joe has been out and about in the last 20 years in the U.S., there’s a strong likelihood that he’s come into contact with other forms of “craft beer” than merely IPA.  For example, if Joe has walked down the beer aisle of the grocery store in the last decade or so, he’s probably noticed a wider selection of beer on the shelves than just BMC or other light lager, even if he doesn’t know the term “craft beer”.

But is it reasonable to think that Joe hasn’t heard of the term “craft beer” or “IPA”, given their popularity?  Not really. In fact, he’s probably come across a sign in the supermarket or liquor store that read “craft beer” with a variety of single bottles of different brands and styles to choose from.

And with the boom of craft beer came an increase in craft breweries.  If Joe has ever visited a craft brewery in the last 20 years, he would have most likely been introduced to a variety of craft beer, not just IPA.

The fear that the term “craft beer” currently means or will come to mean IPA is not likely given the current variety within the craft beer market.  While it is true that the less someone is exposed to different styles of beer, the fewer categories of beer she may have in her mind, this does not mean that people will automatically take craft beer to mean IPA.  Even if in the future all craft breweries brewed only IPA (which seems unlikely, but then again, who thought the Prohibition would ever happen), as long as people remember or have knowledge of other styles of beer, craft beer would not come to mean IPA.

But remember, the worry that “IPA” is evolving to mean “craft beer” isn’t being generated by people like Joe; it’s being generated by obsessed, hop-crazed, craft beer fans who have an unquenchable thirst for the IBU-laden brew.  And in this case, perhaps a worry is justified and warrants some attention.

Alas, all of this writing has made me thirsty something fierce.  Luckily, I know just what would hit the spot: a super hoppy, full-flavored bottle of… craft beer.