Founded in 2010, Untappd is a popular beer rating mobile phone application among other things.  Untappd has exactly 50 beers on its Top Rated Beers list, and of course that data is subject to change over time.

We pulled the Untappd’s Top Rated Beers data on 3/7/18, and for your convenience, we created a sortable version of that list which can be used to arrange the results by brewery, beer style, state/country, ABV, etc.

Now on with the show…

As you might have noticed, Goose Island’s Bourbon County line of beers dominate the Top 10, gobbling up the first four places in part because of how Untappd often counts different vintages of the same beer as unique entries in the rankings.

Other beer rating websites like BeerAdvocate often collapse a beer of different vintages into one entry, as with Bourbon County Brand Coffee Stout.  Not to mention, Untappd leaves beers that are no longer brewed in the Top 50 including the top four beers, whereas such “retired beers” are removed from BeerAdvocate’s Top 50.

With that in mind, the flat out leader of Untappd’s Top Rated Beers remains Goose Island, a brewery that is no longer considered a craft brewery by the Brewers Association as of 2011 when the brewery was sold to Anheuser-Busch InBev for a reported $38.8 million. 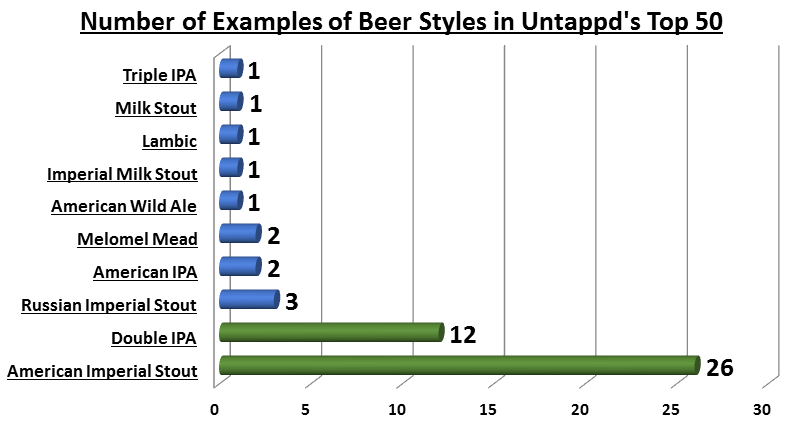 The variety of beer styles in the Top 50 is even less diverse if you lump “triple IPA” and “Double IPA” under the same category as BeerAdvocate and others do, and likewise combine “Milk Stout” and “Imperial Milk Stout” as one style.  The diversity of beer styles shrinks even further if you remove “Melomel Mead,” a kind of fruit honey-wine, as shown in the chart below. 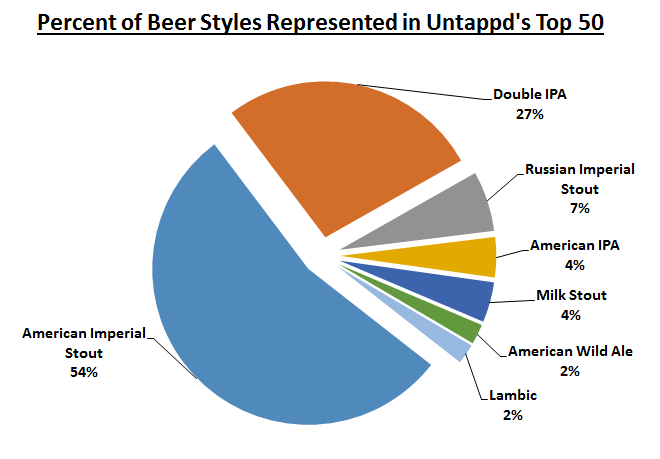 As you can see in chart above, American Imperial Stouts make up fully 54% of the beers in Untappd’s Top 50, while Double IPAs account for 27%, which means that 4 out of 5 beers in Untappd’s Top 50 was one of those two styles of beer.  American Imperial Stouts and Double IPAs were also by far the most popular beer styles in both BeerAdvocate’s Top 250 and Top 50.

3. Analysis of the Alcohol Content of Untappd’s Top Rated Beers

The majority of beers in Untappd’s Top 50 tend to be a bit on the boozy side, as you can see in the chart below. 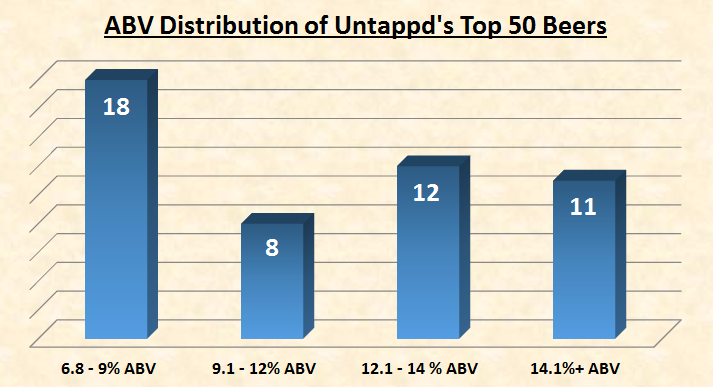 The average ABV  is right at 11.55%.  The beers with the lowest ABV on Untappd’s Top Rated Beers are “Julius” and “JJJULIUSSS” both from Tree House Brewing Co. and weighing in at 6.8%, while the most potent beer on this list was “Black Tuesday Reserve (2015)” from The Bruery with an alcohol content of 20.5%.

These figures exclude the unlisted ABV of “Rare Scoop” from Cycle Brewing.  But seeing as how that beer is an American Imperial Stout, the average ABV is not likely to be affected much.

4. Analysis of the States/Countries of Untappd’s Top Rated Beers

With the exception of a single Lambic style beer from Brouwerij 3 Fonteinen of Belgium, all of the beers that appear in Untappd’s Top Rated Beers were from 13 American breweries, which may simply be a result of a predominantly American user base. 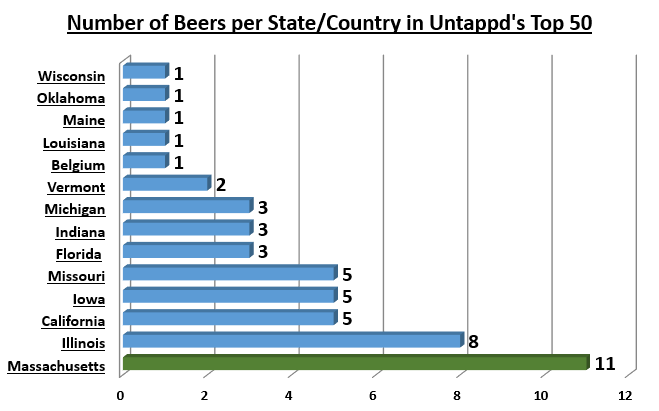 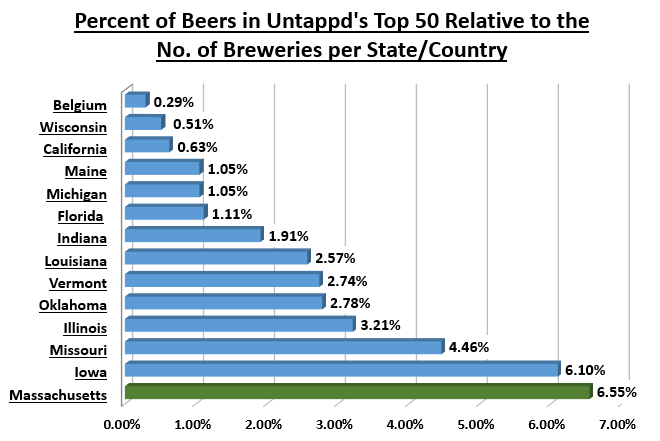 Even when we look at the numbers this way, Massachusetts is still leading the pack with 11 beers in the Top 50 coming from a possible 168 breweries in the state, or 6.55%.  Iowa follows close behind with 5 beers in the Top 50 in a state of 82 total breweries.  Similar to Massachusetts, all 5 beers from Iowa came from just one brewery, namely Toppling Goliath Brewing Co.

There were a total of 23 different breweries with at least one beer in Untappd’s Top Rated Beers, as shown in the chart below. 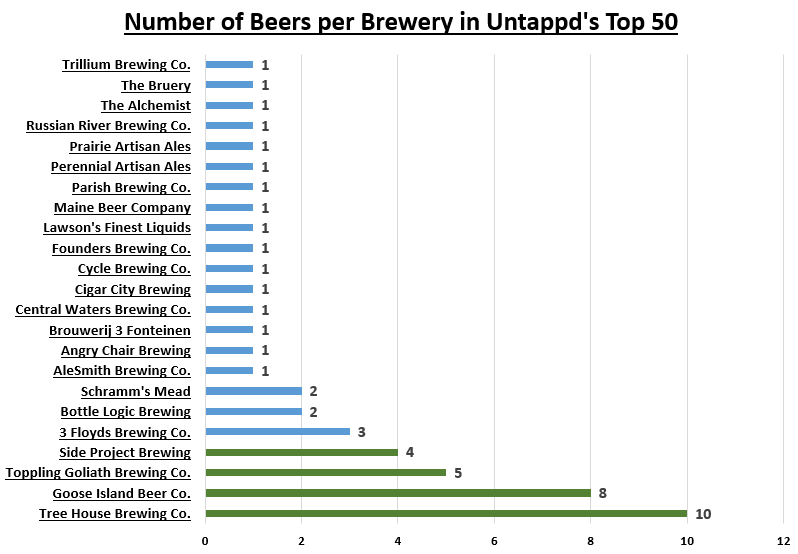 The average number of beers contributed per brewery was 2.17. However, any brewery with more than 3 beers in the Top 50 was considered a statistical outlier, which is indicated with a green data point in the chart above.

There were exactly four breweries contributing a statistically significant number of beers to Untappd’s list of Top Rated Beers: Tree House Brewing Co. with 11, Goose Island Beer Co. with 7, Toppling Goliath Brewing Co. with 5, and Side Project Brewing with 4.

Since some breweries produce a greater variety of beers than others, this might create a greater potential for breweries that beer a larger variety of beer to have more beers in the Top 50 than others.  For instance, Goose Island had 7 beers in the Top 50, which was the second highest number of all.  However, it turns out that Goose Island produces a whopping 250 different beers, which means just 2.8% of the beers that the brewery makes appeared in the Top 50.

Following this line of reasoning, below is a chart showing the percent of beers contributed by a particular brewery based on the number of beers that brewery produces. 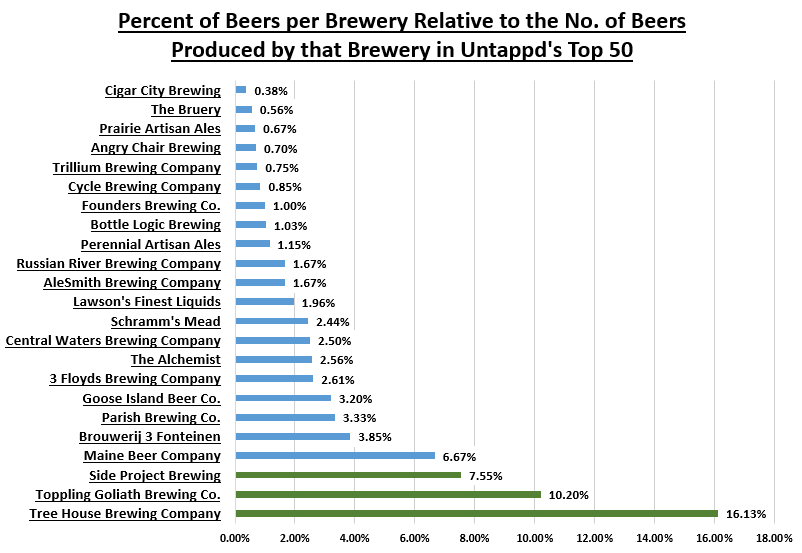 There were four breweries with a statistically significant percentage of beers in the Top 50 relative to the total number of beers they produce.  These outlier breweries are indicated with green data points in the chart above, namely Tree House (16.13%), Toppling Goliath (10.2%), and Side Project (7.55%).

The average percentage of beers contributed per brewery relative to the total number of different beers produced was 3.19%, and any brewery with more than 6.78% was considered to be an outlier.

Tree House and Toppling Goliath were also found to be contributing a statistically significant number of beers to both BeerAdvocate’s list of Top 250 and Top 50 Beers, which suggests that both of these breweries are of particular note.

However, there is at least one more major data point to consider in our quest to uncover the ultimate breweries: RateBeer.

Next on Tap… Data Chug: An Analysis of RateBeer’s Top 50 Beers

While the data obtained from Untappd is taken at face value for the purposes of this analysis, one is well within reason to further analyze that source data in terms of appropriate beer style grouping for the given commercial examples, ranking methodology, verification of actual breweries in production, etc.  In addition, considering that much of the data collected by Untappd is added by its users, one may further wish to question how that user group may affect the overall data (% of English-speakers, % of American users, etc.).

Also, the methods and parameters of data analysis herein are but one way of looking at the given information. Furthermore, all of the data collected from Untappd occurred in March, 7th, 2018, and therefore represents a single time-slice of the beer landscape, which of course is subject to change in the future.