Takes One to Know One

The whole “underdog overcoming adversity/minority civil rights subtext” story aside, the more obvious truth about why geeks are attracted to craft beer culture is this: Most homebrewers are geeks (or nerds, or nerdy geeks, or geeky nerds…).  Ever attend a homebrew club meeting, and you’ll know what I mean.  The vast majority of homebrewers who eventually become pro brewers are usually some kind of engineer (software, electrical, mechanical), and we all know that in order to graduate with a degree in engineering, you have to be able to speak at least some Klingon.  In fact, even Charlie Papazian, father of modern homebrewing and author of the homebrewer’s bible, The Complete Joy of Home Brewing, was a professional nuclear engineer before he led the homebrew revolution in America.  And like a lot of other geeky clubs, most homebrew clubs are pretty heavily skewed towards the Y end of the chromosome spectrum; but in defense of homebrew clubs, beer is technically the traditional beverage of choice served at a sausage fest…  Bazinga!

But unlike some of the quasi-chauvinistic dynamics of geek culture that sometimes crop up, homebrewers seem to readily welcome females into the tribe— most likely so as not to incur the wrath of Ninkasi, Sumerian Goddess of Brewing. (And therein lies the remedy to geek chauvinism: Spread the word that the supreme deity of Geekdom is the vengeful goddess Binaria, a female, and problem solved.)

Despite brewing’s pagan past, modern day homebrewing and craft beer have literally come down to a science: brewing and fermentation science to be more precise.  And with core subjects consisting of physics (thermodynamics, mechanics and process control), biology (biochem, cellular and micro) and chemistry (organic and inorganic), we’re about two leptons away from the next World Beer Cup being hosted at CERN.  As most professional brewers started out as homebrewers who left their careers in science and engineering to try to make a career out of their hobby, it should come as little surprise that geeks and nerds have fully infiltrated the craft beer scene like Cylons on Galactica.

You may have seen the infographic created by self-proclaimed geek-nerd Burr Settles where he attempts to settle (yes I did) the age-old “difference between geeks and nerds” dispute.  Using data from Twitter, Settles looked at hashtags and words from tweets and matched them up with how often they were found accompanied by the words “geek” or “nerd”.  He then plotted that data on a chart showing the strength of those correlations.  For example, the hashtag “#Apple” [computers] was used in combination with the word “geek” about five times more than it was with “nerd”, thus implying that Apple is more geeky than nerdy. 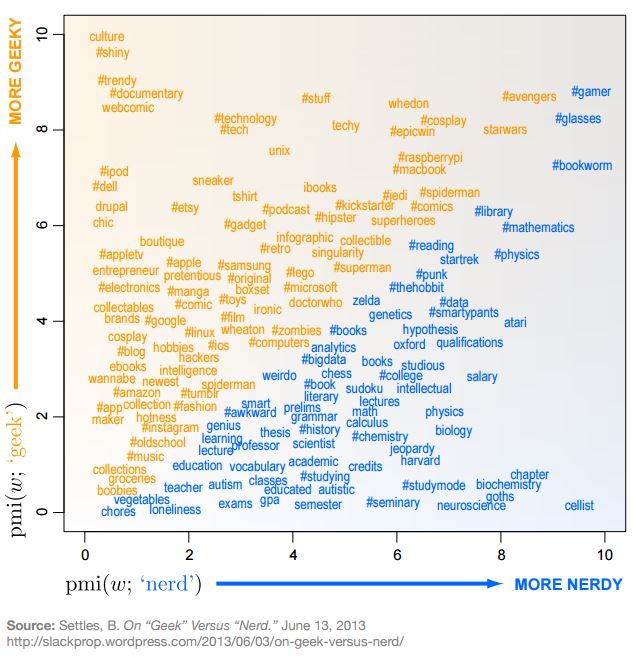 Although Settles didn’t enter “#beer” as a data point on his scatterplot chart, he did provide his raw data which had “#beer” being slightly more associated with “geek” than “nerd”, though “geek” and “nerd” both showed a fair association with “#beer”.  Just the word “beer” by itself (no hashtag) yielded results favoring a stronger correlation between “beer and geek” than “beer and nerd”, but it gets better.

When it came to “#craftbeer”, “geek” blew it out of the water with a correlation score of 3.65 as compared to the dismal “nerd” score of 0, giving support to the idea that craft beer seems to belong squarely in the geek camp. (I’m sorry.  I promise, that’s the last pun of that sentence.)

But not so fast. Remember that all this data came from people (or tweetbots) who tweet.  And according to Settle’s data, the word “tweet” was more strongly associated with geeky than nerdy, so maybe we have to take all this geek VS nerd talk with a nerdy grain of beer salt, or at least come up with a snappy way to normalize the scores.  Sorry Settles, this age old debate ain’t settled yet.  #Oops!…IDidItAgain

Charts and hashtags aside, the overlap between geeks and nerds is huge, and Settles admits that the two aren’t two distinct personalities as much as different aspects of personality, and concluded that “the distinction is that geeks are fans of their subjects, and nerds are practitioners of them.”  So what aspect about the geek’s personality is it that draws them to craft beer culture?  (Segway = #bfskinner)

How to Brew Fruit Beer: The Case of the Disappearing Fruit