Analysis of the Hangover Cures from Three Sheets

If you’ve never heard of the drinking/travel show Three Sheets, well, not to oversell it, but it is very likely the greatest drinking show.  Ever.  Over the course of four seasons (52 episodes), endearingly witty host Zane Lamprey (a.k.a. “The Guinea Pig of Booze”) traversed the globe and imbibed in everything from a majestic $10,000 bottle of 50-year-old scotch in Scotland, to snake penis wine in Taiwan. 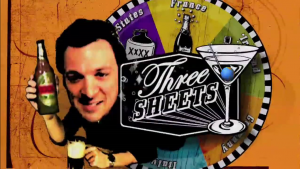 (By the way, if you missed the original series run, you can find it on YouTube, Hulu, etc.  And if you’re thirsty for new episodes, you’re in luck because Three Sheets is coming back!)

Of course, being a dedicated drinking diplomat usually comes at a price which is customarily paid in the form of a hangover.  But with almost every new hangover came a hangover cure— some more effective than others.

That said, sometimes the actual effectiveness of the hangover cures presented on the show was a bit vague.  But we did our homework, and it turns out that there’s actually a Three Sheets book (4.5/5 stars on Amazon) that offered more clarity.  So in the spirit of thoroughness, we’ll take a look at the hangover cures/remedies listed on the show and book.

(If you’re curious what caused the hangover in each episode, check out our quasi episode guide called Every Hangover Cure from Three Sheets.)

Analysis of the Hangover Cures from Three Sheets (T.V. Show)

We’re going to keep this analysis pretty simple and only look at four things: (1) the hangover cure from a given episode, (2) the country/city with which the cure is associated, (3) the cultural accuracy of the cure, and (4) the cure’s effectiveness.  To be fair, in cases where we were unable to confirm the cultural accuracy of a given hangover cure, it doesn’t necessarily mean it’s not culturally accurate.

Also, it should go without saying that the effectiveness of a given hangover cure is purely based on Zane’s personal experience, so your mileage may vary.  In addition, not every episode of Three Sheets contains a hangover cure either because no hangover was reported, as with the Japan and Greece episodes, or simply because none was given, as with the episodes for London, New York, Vince, Barcelona, Saigon, Cognac, Lithuania, and Barbados.

Lastly, we didn’t list the hangover cure for the Poland episode (splashing around at an indoor waterpark) mainly because Zane pointed out that getting in water was one of his personal hangover cures and it was therefore not directly linked to that particular country.  (This might also explain why we weren’t able to confirm the cultural accuracy of similar hangover cures for Denmark, Croatia and Tahiti.)

Below is a sortable list of the hangover cures from Three Sheets (T.V. Show):

The chart below shows how common a particular hangover cure from Three Sheets was: 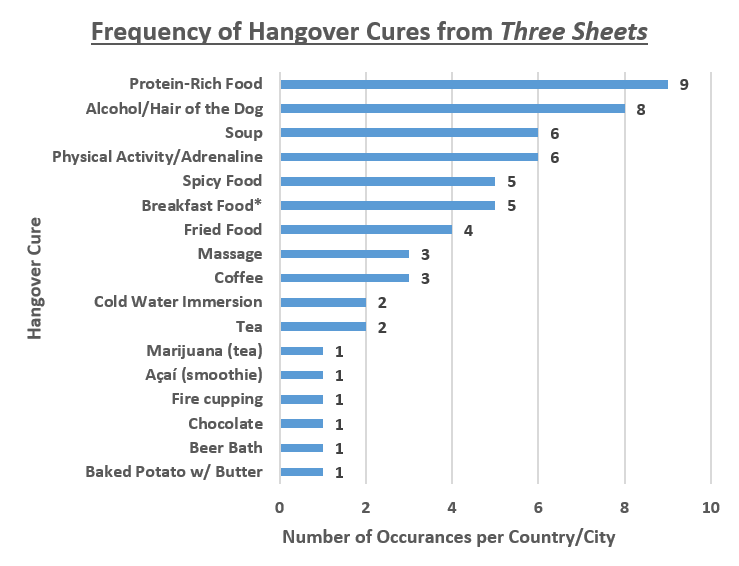 * Because the composition of “breakfast food” can vary from culture to culture, we use the term when a given culture refers to their dish/hangover cure as breakfast food.

Analysis of the Hangover Remedies from Three Sheets (Book)

By the way, the book points out that there is no such thing as a total hangover cure (because that wouldn’t stay a secret for long), and therefore uses the term hangover remedy instead of cure.

In addition, the book spells out the effectiveness of all but one hangover remedy by assigning each one a rating of 1 – 3 (or 4) sheets.  To explain, “a hangover remedy that gets a one-sheet rating would do the trick if you only had a few beers the night before.  Two sheets is for the morning after you had more than a few but you still remember how you got home.  A remedy that’s three sheets is effective for even the surliest of hangovers— the ones that usually linger until well into the next evening.”

And last but not least, despite the fact that the book is clearer than the show when it comes to hangover remedies, only 15 remedies were discussed, some of which were different than what were featured on the show.

Below is a sortable list of the hangover remedies from Three Sheets (Book):

In an interview, Zane candidly summed up his experience with hangover cures:

Q: Have you ever experienced a hangover cure that actually worked?

A: If I had found something that was a hangover cure, I would have much more money than I do now. I definitely have found remedies. A big meal and go back to sleep is the best I can do. I’ve done cold water a few times.

A: No, submerging my entire self into it. Your endorphins and your adrenaline start pumping because your body thinks you’re about to die so at that point your hangover becomes tertiary. I think that’s the best you can do — put your hangover in third place.

The Brewer Who Quit Drinking Beer