Beer Styles by Country of Origin

The following chart shows that the U.S. leads the world in total number of beer styles contributed with 29, followed by Germany at 22, The British with 19, Belgian & French with 18, the Scottish with 3, the Irish and Japanese with 2 each, and lastly the Czechs, Finnish and Russians each with 1. 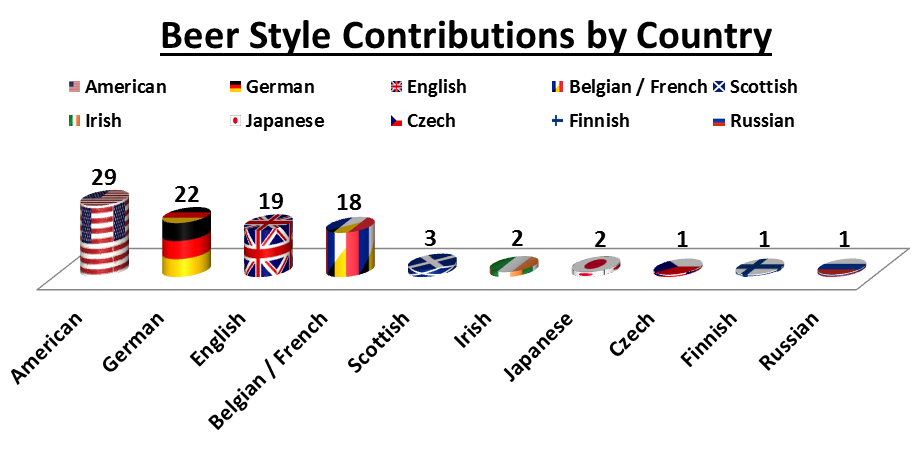 This apparent disproportion is even easier to see in the chart below that shows the total number of commercial examples by beer styles native to a given country.

Of course this begs the question: Is the U.S. really dominating, relatively speaking, after we account for the number breweries there are per country?   Not necessarily.

For example, when we look at the total number of breweries per country in comparison to the number of beer styles native to those respective countries, we see that the U.S. has actually produced relatively few beer styles as compared to most other countries as shown in the chart below. 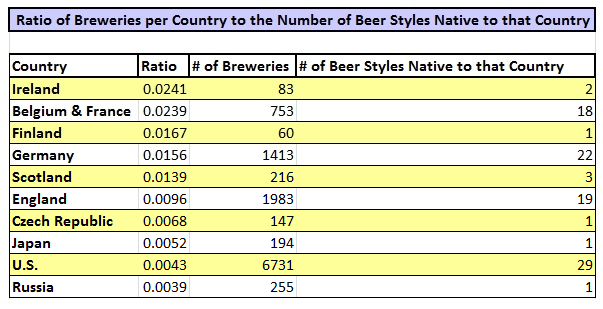 Notice that relative to the number of breweries in the chart above, the U.S. is almost dead last in terms of the total number of beer styles contributed, sitting just above Russia.

Take for example the Finnish beer style known as Sahti where only 10 of the 74 commercial examples listed on BeerAdvocate are actually brewed by Finnish breweries.

Next on tap: Data Chug: An Analysis of BeerAdvocate’s Top 250 Beers

While the data obtained from BeerAdvocate is taken at face value for the purposes of this analysis, one is well within reason to further analyze that source data in terms of the completeness of the listed beer styles, definitions of those styles, appropriate beer style grouping for the given commercial examples, verification of actual breweries in production, etc.  In addition, considering that much of the data collected by BeerAdvocate is added by its users, one may further wish to question how that user group may affect the overall data (% of English-speakers, % of American users, etc.).

Also, the methods and parameters of data analysis herein are but one way of looking at the given information. Furthermore, all of the data collected from BeerAdvocate occurred in Feb. 2018, and therefore represents a single time-slice of the beer landscape, which of course is subject to change in the future.