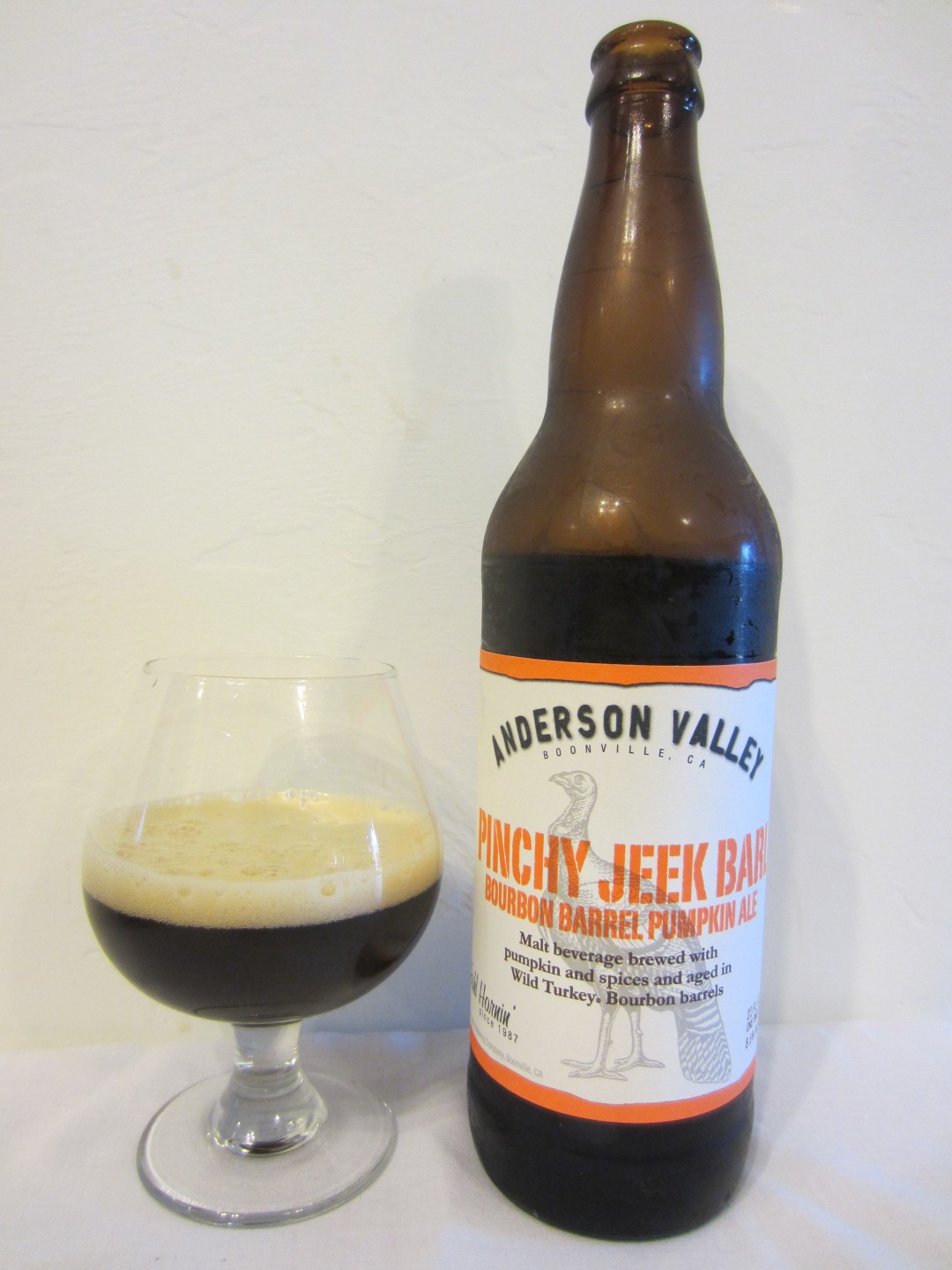 1. Pinchy Jeek Barl – Anderson Valley Brewing Company: So what’s with the name? More on that in a second.   This full-bodied, extremely well-balanced, carefully crafted pumpkin ale is matured for nine months in Wild Turkey Bourbon barrels and pours a dark root beer colored body with excellent clarity, topped by a ½ inch of creamy hazelnut head, leaving behind a swath of lace.  The brew conjures up alluring aromas of maple brown sugar-encrusted acorn squash, coffee cake with crumble toppings, oatmeal cookie, Bourbon barrel, a sweet hint of leather, caramel, cedar, and peanut brittle.  The medium-high sweet taste is reminiscent of caramelized pecan pie, oatmeal cookie, subtle pumpkin toffee, molasses, brown sugar, praline filling reduction, cloves, allspice, maple, vanilla extract with a bit of bourbon and wood tannins mid-palate all the way into the dry finish.  Even with an ABV of 8.5%, high praise goes to Anderson Valley for thoughtfully integrating the alcohol as but one of many components in this dark ale, showing restraint, and not simply producing an alcohol-centric booze-bomb for the sake of booze.  With pleasant notes of vanilla, leather, wood, and warming alcohol in the aftertaste, Pinchy Jeek Barl leaves you in need of just another sip… bottle… case… endless supply.

Oh right, the name… “Pinchy Jeek” translates roughly from Boontling as “Stingy Jack”, after the mythical smooth-talking drunkard of Irish folklore who tricked the devil into getting out of being sent to hell, but was too much of sinner to get through the pearly gates, and was thus condemned to walk the night for all eternity, with only a lantern comprised of a single glowing hot coal inside a large rutabaga to light his way.  “Stingy Jack” eventually became known as “Jack of the Lantern” (or “Jack-o’-lantern”), and every year around this time, folks carve their own spooky version of Jack’s lantern to frighten off evil spirits, along with old conniving Jack.

As for the word “Barl”, it refers to Anderson Valley’s “Barl Series” of beers, which is their beer aged in Wild Turkey Bourbon barrels.  “Barl” is also the verb “to shoot” in Boontling.

“Boontling”, or the nearly extinct language (ling) of Boonville (Boont) located in the Anderson Valley of California, was invented in the late 19th century and spoken by many of the loggers, farmers, and ranchers who incorporated words from Irish, Scottish Gaelic, and other languages into Boontling.  Anderson Valley Brewing Co. embraces its surrounding culture, including Boontling, which is why “Pinchy Jeek Barl” probably won’t be the last time you last time you happen across the ling of Boont.

And thus concludes this year’s monster list of pumpkin beers.

As always, in our never-ending mission to shamelessly promote beer, please go out and give a try to any and every beer we mentioned on this list (and those we didn’t) to decide for yourself what you think!

And while you’re at it…

[P.S. A special thanks goes out to all the tasters who contributed their time and discerning palates towards this harrowing journey through the pumpkin patch of beer!]